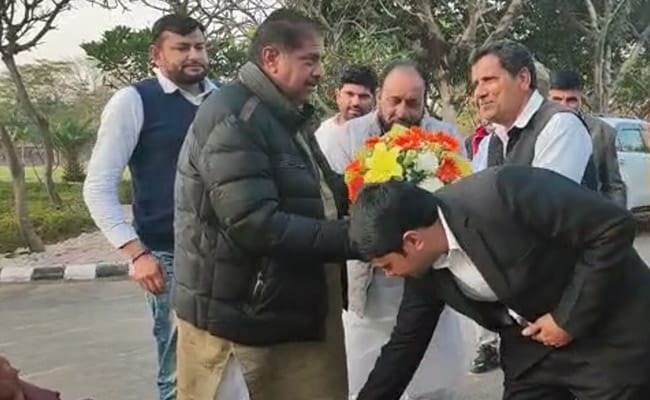 Ajay S Chautala has been released from Delhi’s Tihar jail

Former MP Ajay S Chautala has been released from Delhi’s Tihar jail after he served a 10-year sentence in a teachers’ recruitment scam in Haryana. Ajay Chautala and his father, former Haryana Chief Minister Om Prakash Chautala, were among 55 people convicted for illegally hiring over 3,000 teachers using illegal means.

Ajay Chautala and his father, who headed the Indian National Lok Dal, or INLD, were convicted of forging documents to hire over 3,000 junior basic teachers, or JBT, instead of others who had applied through the proper procedure in 1999-2000 in Haryana.

Ajay Chautala was greeted by supporters, who brought bouquets of flowers, outside Tihar jail. He hugged and shook hands with them.

His son, Dushyant Chautala, is the Deputy Chief Minister of Haryana. Dushyant Chautala heads the Jannayak Janta Party, or JJP, which was formed as a breakaway faction of the INLD in 2018 following a feud among the Chautalas.

The Central Bureau of Investigation, or CBI, had filed a chargesheet in June 2008 into the JBT scam. It named Indian Administrative Service, or IAS, officer Sanjiv Kumar, who filed the complaint, and Om Prakash Chautala’s former Officer on Special Duty Vidya Dhar in its chargesheet.