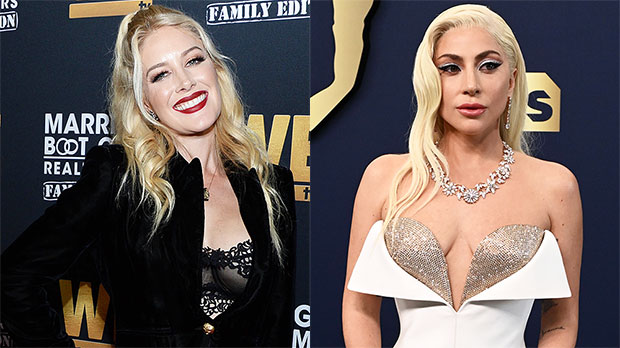 Heidi Montag claims her music career was taking off in 2009 — until Lady Gaga stepped in and ‘pulled the cord.’

Heidi Montag is claiming Lady Gaga stole her music career after the pop star briefly appeared on an episode of The Hills in 2009. Heidi says the “Poker Face” singer — who was up-and-coming at the time — was also working with producer RedOne (real name Nadir Khayat) like Heidi and, well, some drama ensued.

“[RedOne] and I were going to pair up and we were going to do what him and Lady Gaga ended up doing, which is writing every song together and producing,” she told the Unpopular podcast. She and the producer went into the studio as Heidi recorded the song “Fashion,” something RedOne produced and Gaga wrote.

“He was like, ‘I just need to get the consent of the writer.’ And so I just thought Lady Gaga was a writer, because she was a writer on the song,” Heidi said. “And he was like, ‘Hey, I’m gonna cut ‘Fashion’ with Heidi. I have her in the studio, she loves it.’ And [Gaga’s] like, ‘Great. Sure, she can have that song.’ So then I recorded it and it was my song. That was the impression I was under.”

Heidi continued by saying she recorded the song and then used the track during an appearance on The View to promote her clothing line. Following the day time talk show, however, Heidi claimed Gaga then took the song back to record herself for the soundtrack of the 2009 rom-com Confessions of a Shopaholic. “It’s hard because people are like, ‘I love Lady Gaga!’ And I’m like, ‘I’m sure she’s great but I have not had the best encounter with her,’” Heidi said.

The former reality star then recalled a phone call she had with the “Bad Romance” singer after she made a cameo in that episode of The Hills as Gag apparently gushed about shooting a scene with Lauren Conrad — Heidi’s biggest foil.

“I talked to her on the phone for a second and she was like, ‘I just filmed with Lauren and Whitney [Port] on The Hills.’ I was like, ‘Who is this girl? What is happening? She’s a hater, clearly!;” she exclaimed, adding how Gaga’s love of Lauren would “obviously make you not a Heidi fan!”

Heidi then claimed Gaga stopped her from working with RedOne on any new music. “She did not want me working with RedOne and she told RedOne she wouldn’t work with him anymore if I kept working with him,” Heidi alleged. “And he’s like, ‘I’m sorry. She’s my writing partner for huge things.’ We even went out to dinner with him several times and we were hanging out with him and she pulled the cord.”

She continued, “And I was in the studio with her producer before she came out, so I think she saw that RedOne is one of the biggest and best producers and writers and if he takes Heidi that’s taking my magic. He wrote ‘Just Dance’ for her, he wrote almost every song with her and produced it. So of course she’s not going to want to share that when at that moment I was a potential rival for what she was doing.”

Back in 2009, RedOne confirmed to Us Weekly he was working with Heidi and called her “a born star” at the time. He then, however, walked back those comments  later, tweeting, “I cannot Believe the LIES they are putting out about me producing Heidi Montag’s album!!! NOT TRUE!!!!!” he tweeted at the time, per Daily Mail.

HollywoodLife has reached out to Lady Gaga’s representative for comment.