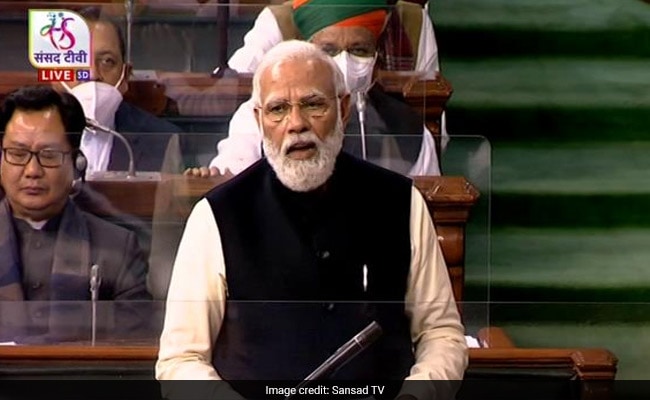 PM Modi is replying to the debate on the Motion of Thanks to the President’s address.

Prime Minister Narendra Modi is replying to the debate on the Motion of Thanks to the President’s address in the Lok Sabha in the ongoing Budget Session of the Parliament.

The 2022 Budget Session of the Parliament commenced on January 31 with President Ram Nath Kovind’s address. The first part of the budget session is being held from January 31 to February 11 and the second part will take place from March 14 to April 8.

*Don’t show them the mirror, they will break the mirror

*Even after so many losses, your arrogance remains and your ecosystem does not let it go

*Public recognised you, some have already recognised and some will in future. For 50 years, you have had the opportunity to sit here. So why can’t thnk of it?

*The issue is not about election results, it’s about their intention. The question is why even after being on power for so long that the people of the country are rejecting them again and again.

*Even the poor have a bank account. Now the government’s money directly reaches his account – these all, if you’re connected to the ground and live among the public, then it would be visible. But sadly, a lot of you whose time has stopped since 2014 and they can’t come out of that and you have suffered the consequences

*After so many years of independence, when light comes to a poor’s house, his happiness increases the country’s happiness.

*I am ready to sit down, PM banters with Adhir Ranjan Chowdhury

*Azadi ka Amrit Mahotsav is a an inspirational moment. This is the time for a pledge.

*After second world war, a new world order came into being. I see after pandemic , the world will move towards a new world order; such turning point that we should not miss out on. India’s voice should be heard at the world table.

*I am seeing the would is moving toward a new order during the pandemic.

*Country lost Lata ji. whose voice mesmerized and inspired the country. She sang in 36 languages – this is an example of country’s unity and integrity. Today, I pay tribute to her.