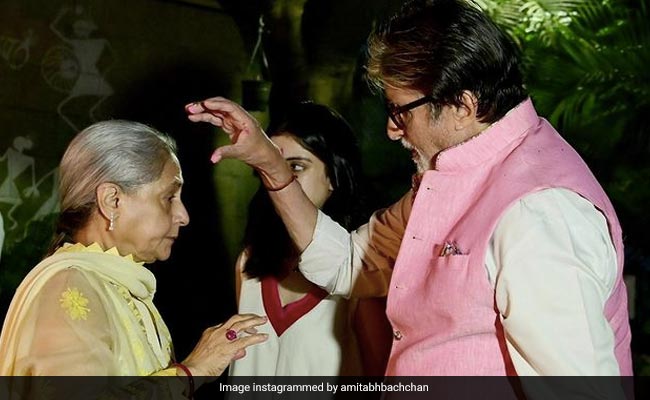 Bollywood’s first family had a somewhat muted Holi, mainly because half the family is not in Mumbai – Abhishek, Aishwarya and Aaradhya left on vacation earlier this week. That left the senior Bachchans in charge of Holi celebrations at home – always keeping in mind that Amitabh and Jaya Bachchan are responsible for one of Bollywood’s most unforgettable Holi moments onscreen, the song Rang Barse from Silsila. Safe to say that Holi was in safe hands; in a post shared on Instagram by Big B, he anoints Jaya Bachchan’s forehead with a gulaal teeka. Their granddaughter Navya Naveli Nanda is in the picture as well, holding a thali crowded with Holi colours – it’s hard to tell but it looks like Amitabh Bachchan chose the pink gulaal from the options.

Meantime, Abhishek Bachchan was not unmindful of Holi on his vacation. He shared a set of two pictures of himself, the first in a clean white T-shirt, the second in the same T-shirt but spattered with Holi colours. “Happy Holi,” he wrote, giving photo credit to celebrity lensman Rohan Shrestha.

Amitabh Bachchan, last seen in Chehre, has a big release coming up in Brahmastra co-starring Ranbir Kapoor and Alia Bhatt.