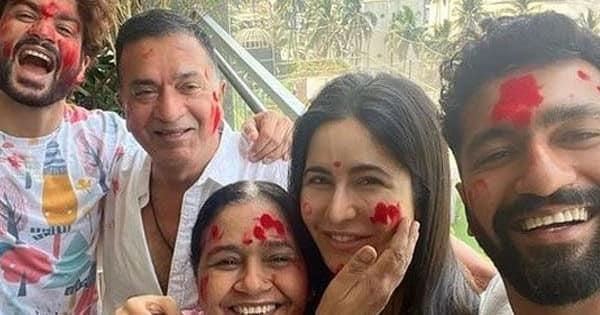 Bollywood’s cutest couple Vicky Kaushal and Katrina Kaif got married in December 2021. The two recently celebrated their first Holi post-marriage and enjoyed themselves thoroughly with their family. Both Katrina and Vicky do not miss an opportunity to treat their fans with glimpses from their happy married life. Recently, the newlyweds took to their Instagram and shared pictures from their first Holi celebrations. Both Katrina and Vicky captioned the pictures as, ‘Happy Holi’. In the picture, Katrina was seen celebrating first Holi after marriage with her husband Vicky Kaushal, his father Shyam, mother Veena, and brother-in-law Sunny. The family was seen twinning in white and looked super-cute as they smiled at the pictures. The family had gulal on their faces and clothes. Also Read – Naagin 6’s Tejasswi Prakash shares excitement of celebrating Holi with Karan Kundrra; says ‘There is going to be an unsaid competition…’

Recently, post-marriage Katrina and Vicky made their first public appearance together as they walked hand in hand for Apoorva Mehta’s grand birthday party. The couple stole the show at the party with their appearance and fans went gaga over their adorable chemistry. Also Read – Holi 2022: Nakuul Mehta, Mouni Roy, Karan Kundrra and other TV celebs send wishes to their fans on the festive occasion

Katrina and Vicky keep sharing pictures with each other and make their fans happy. On the work front, Katrina will be seen next in Tiger 3, while Vicky is seen shooting for Luka Chuppi 2.