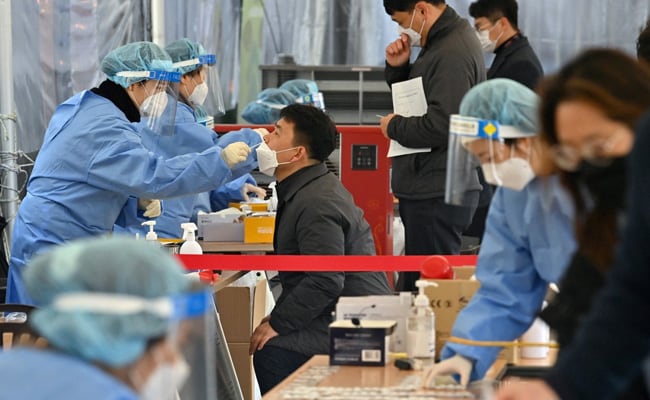 South Korea said it would ease pandemic restrictions Friday, even as the country’s daily caseload crossed 100,000 for the first time, with officials citing economic concerns over social distancing measures.

The country reported a record 109,831 new infections for Thursday, with health experts warning this number could rise to 270,000 new cases a day next month.

Despite the spike in cases, Seoul officials said they would ease restrictions by allowing cafes and restaurants to stay open an extra hour till 10 pm starting Saturday.

“Considering the deepening difficulties of the people’s livelihood and economy, we have concluded that the minimum adjustment was inevitable,” Prime Minister Kim Boo-kyum said.

The country will also drop its requirement that businesses including restaurants and cafes maintain handwritten visitor logs to allow for contact tracing, officials said.

The vast majority of South Korea’s eligible population has been vaccinated and boosted, and despite the record number of infections in the country of 52 million people, death rates remain very low.

“We are focusing on high-risk groups when it comes to epidemiological investigation and contact tracing management,” said Lee Ki-il, a health ministry official.

“Extensive contact investigation is now proving to be somewhat ineffective,” they added.

Seoul abandoned its vaunted “trace, test and treat” programme earlier this month, as a dramatic surge in Omicron cases threatened to overwhelm its healthcare system.

Instead of mass testing and aggressive contact tracing, the government is now asking patients with mild or moderate symptoms to look after themselves at home.

The government has been facing strong backlash from small businesses and self-employed Koreans, who say Covid restrictions — including the mandatory 9 pm curfew — were pushing their businesses to the brink.