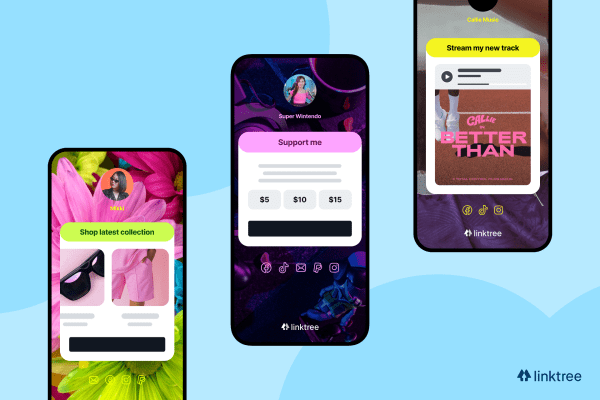 Who would’ve thought that an entire swath of startups would spring up all because Instagram, TikTok and Twitter only let you link to one website in your bio? Apparently, Linktree co-founder and CEO Alex Zaccaria did.

“We started back in 2016 with a really clear use case to solve this problem for musicians and artists that needed a better way to link out of socials to all their different revenue streams, and we really needed to unify that experience for them to help drive monetization,” Zaccaria told TechCrunch. “There was nothing else like [Linktree] that existed. We created this category.”

Over the last year and a half, Linktree raised a combined $55.7 million over two funding rounds. Today, the Australia-based company announced a $110 million all equity round led by Index Ventures and Coatue Management, with participation from AirTree Ventures, Insight Partners, and Greenoaks. This Series C raise values Linktree at a whopping $1.3 billion. That’s a lot for what’s essentially a lightweight mini-website builder.

These tools are most useful for influencers or brands. Linktree boasts clients like Selena Gomez, TikTok and Major League Baseball, but even ordinary social media users have found uses for Linktree — some people use it to list resources to support causes that they care about, or simply direct their friends to their profiles on other platforms.

Like any good idea, other companies tried to spin the idea into something better — platforms like Beacons, Snipfeed, Lightricks and Streamlabs launched link-in-bio builders with an eye on social media creators, but Linktree has been able to keep up by introducing its own bells and whistles, like integrations with PayPal and Shopify. Linktree also recently acquired Songlink/Odelski to create a Music Link feature. With Music Link, artists can paste in the link of their song on any platform, and their Linktree will auto-populate with links to their song on all platforms, rather than individually navigating to each platform to get a link.

“We’re over 24 million users now, with close to 40,000 signups per day,” Zaccaria said. Just last year, he told TechCrunch that Linktree had 12 million global users, indicating that, according to the figures provided, Linktree has doubled in size since March 2021.

“Linktree is definitely in a hyper-growth phase, and these fundraises really focus on growing the team. We were seven people in March 2020, we’re now over 230 people globally, and we expect to be hiring another 200 to 300 roles this year between the States and Australia.”

Linktree also just brought on Mike Olson as President — most recently, he was Senior Vice President of Growth Initiatives at Twitch. At Linktree, Olson will focus on United States market expansion.

“We’re based in Australia and the majority of our team is here, but most of our users are in the US,” Zaccaria told TechCrunch. “We’re looking to scale that team there a lot.”

Linktree offers users four different subscription options, ranging from free to $21 per month. The paid options offer more customization and expanded creator monetization tools. Right now, Linktree doesn’t take a cut of transactions (besides standard credit card fees) when users send a creator a tip, buy a product through the Shopify integration or book a request (i.e. creators can offer Cameo-like video shoutouts as a paid digital good on their Linktree). But eventually, Linktree plans to start taking a cut, and that percentage decreases from 10% to 0.5% as your monthly payment increases. So, for a larger creator, shelling out $21 a month to lower Linktree’s cut from 10% to 0.5% could be financially beneficial. Linktree says that it helped 1.7 million people drive 1.2 billion clicks to commerce-related websites in the last year alone.

“What you’re seeing on the pricing page right now is to give users a heads up on what that will be, but right now, we’re not charging at all,” Zaccaria said. “We call it a promotional period right now — we just launched the partnerships [with Shopify, Square and PayPal] over the last year, and we’re helping creators just drive their revenue and be able to get their foot in the door and start using those products without getting extra fees.”

So, despite now being valued at over $1 billion, Linktree’s current revenue streams are limited to monthly subscriptions. Linktree declined to share any revenue numbers, including what percentage of its 24 million users are paid subscribers, or whether or not the company is profitable yet.

“Everything is hyper-focused on this idea that if we add value to users, if we help them win, perhaps they’ll pay for adding value to their lives by way of reaching their audience, converting more, getting better results or saving them time,” Zaccaria said. “We’re really focused on helping creatives save time and help them run their business.”