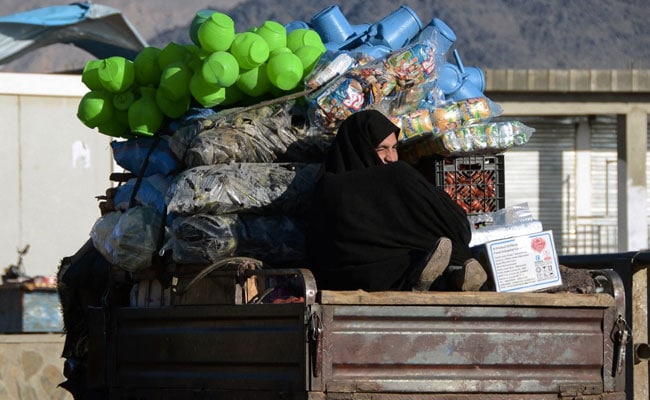 The Taliban’s takeover of Afghanistan in August brought an end to 20 years of fighting — and relief for many women — but harsh restrictions imposed by the new government are also causing despair.

Here is a look at how the lives of three ordinary women have changed with the return to power of the Taliban.

In a hilltop village outside Kabul, children rush between the low-slung entrances of mud-brick houses as Friba settles into what she calls a more peaceful life now foreign forces have left.

“Before this, the planes were in the sky and bombing,” said the mother of three, who like many Afghans goes by only one name.

The Taliban’s victory over US-backed former government forces has dramatically reduced the violence that killed tens of thousands of Afghans over the past two decades — the majority in rural areas — and left many too afraid or unable to leave their villages.

Foreign forces were often accused of disrespecting local customs while successive governments were plagued by corruption.

Having lost several relatives in the conflict, Friba was also in a near-permanent state of worry about family members criss-crossing the country looking for work.

“We are happy that the Taliban came to power and peace came,” she tells AFP at her two-room dwelling in Charikar, Parwan province.

But while security has vastly improved, the struggle to maintain a household remains the same.

“Nothing has changed, nothing at all. We have no money,” she explains.

She and her husband rely on casual farm work and aid handouts to get by, including from the new Taliban rulers.

“I am worried about my daily expenses… I worry day and night,” she says.

Zakia was in her third year of an economics degree at Kateb University in August when her teacher announced the Taliban were at the gates of the city.

“My hands started trembling. I pulled my phone from my bag to call my husband… and it slipped onto the ground a couple of times,” she told AFP.

That was the last time she was in class.

Although private universities reopened last year — and some government institutions restarted classes two weeks ago — many aspiring women graduates have dropped out.

For Zakia, the issue is twofold.

Paying for tuition would be a major challenge given her husband’s government salary has been drastically reduced by the impoverished new leadership.

But her family’s dread over the Taliban foot soldiers that patrol the neighbourhood is the main barrier that keeps her from returning to class.

Zakia has left home only a handful of times since August to limit her interaction with the hardliners.

“(They) say that I might get stopped by a Taliban, maybe they’ll beat me,” she said.

“It would be a huge dishonour for people to say that the Taliban has beaten someone’s daughter.”

She despairs over how close she was to graduating in a country where the education system has been devastated by decades of sustained conflict, disproportionately affecting girls.

“I would look at other people who were illiterate, who were not getting an education, and then look at myself and how my family supported me,” she said.

“I had a feeling of pride, that I was lucky.”

There is some hope for the 24-year-old, who is one of hundreds of Afghan women to benefit from a scholarship with the US-accredited online University of the People.

She logs on almost every day to study business administration, a chance to nurture her mind between sleepless nights.

But thoughts for the future — especially for her young daughter — distress her.

“How will I bring her up in such a society?”

Roya used to bustle into a central Kabul studio each day, ready to face dozens of women students eager to learn the embroidery skills she had mastered.

Her earnings paid the household bills and school fees for her children’s education, while in the evenings she designed and made dresses and blouses for a boutique she hoped to open with her daughters.

“I know every type of tailoring. Anything anyone wanted, I could do,” she told AFP from her home in Kabul.

“I felt strongly that I needed to work, be a strong woman, provide for my children and bring them up through my tailoring,” she adds.

But the foreign-funded training school she taught at closed the day the Taliban entered Kabul, and she hasn’t seen any of her students since.

Now she spends the long days at home with her sons and daughters, who once studied or worked in offices.

Her husband is now the sole breadwinner, earning just a few dollars a week as a part-time security guard.

“I’m so afraid that we can’t even go outdoors into the city or the bazaar.”

With the help of Artijaan, a social enterprise that employs women artisans to create handmade crafts, she makes a little money with the occasional orders of embroidered tablecloths.

But her cupboards remain stuffed with unsold elegant dresses and jackets she once took pride in intricately designing.

“I am sitting at home with all these hopes and dreams,” she sighs.