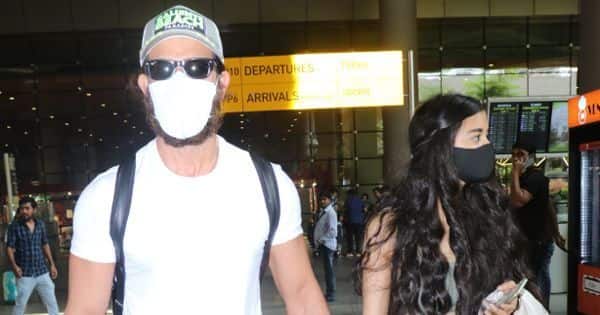 One of the new couples in town is Hrithik Roshan and Saba Azad. The two have been dating since a few months now. The couple were clicked at the airport today. Hrithik Roshan was seen in a white tee with blue pants. Saba Azad wore a mask with a ganjee and track pants. Fans of Hrithik Roshan showered love on the two. It is a known fact that the Roshan family also likes Saba Azad. The two are happy with how things are going between them. Also Read – Trending OTT News Today: Squid Game season 2 to release on THIS date, Sobhita Dhulipala wraps shooting of Made in Heaven 2 and more

However, trolls lashed out badly at Hrithik Roshan and Saba Azad. Some of them said that she looked way younger to the star, and it felt like he was with his daughter. Others threw shade at his choices. Most trolls said that they looked like a father and daughter duo. Some also referred to the recent incident where Sussanne Khan was seeing hugging alleged beau Arslan Goni outside a restaurant. Also Read – Alia Bhatt-Ranbir Kapoor wedding: Guest list, venue, bachelor party and more; Here’s all about the BIG Bollywood shaadi

Saba Azad has been seen in the web series Rocket Boys. She is a musician and theatre actor. Hrithik Roshan will soon start work on his film, Fighter. It will be his first film with Deepika Padukone. Fans have always wanted to see them together. The couple it taking things as they come. Also Read – BTS: Jungkook ALARMED by creepy prank calls in the middle of the night in Las Vegas; ARMYs concerned about sasaengs stalking him

The actor had been single since his divorce with Sussanne Khan. It seems he said that he would never consider remarriage. In fact, engagement rumors of the two are also doing the rounds.