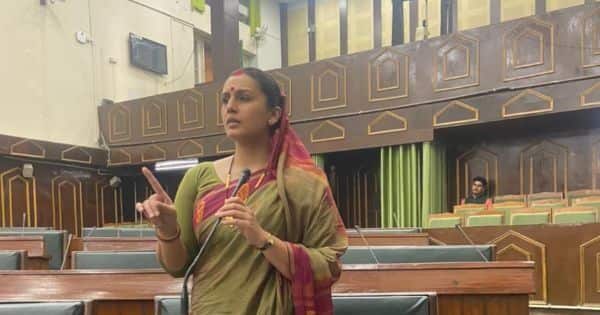 Huma Qureshi starrer Maharani season 2 has wrapped up its final shooting schedule and it’s now over to the post-production work of the eagerly anticipated web series. The Sony LIV original show has been shot Bhopal, Hoshangabad, and Jammu and Kashmir, with Huma’s last schedule being shot in the J&K. In fact, a visibly elated Huma Qureshi couldn’t hold back her sense of euphoria after canning her final shot for Maharani, and shared some interesting updates about the second season of her show. Also Read – BL Awards 2022: Sidharth Shukla’s Broken But Beautiful 3, Manoj Bajpayee’s The Family Man 2 and more – Vote Now for the Most Popular Web Series on OTT

Opening up first and foremost about her experience of shooting in Jammu and Kashmir, Huma Qureshi simply said in two words, without an iota of hesitation, “Beautiful and gorgeous.” Elaborating on why the team shifted away from the normal milieu of the central and north hinterlands of India, and decided to shoot in Jammu and Kashmir, the actress added, “Jammu was a short schedule, but nevertheless plays a crucial role in the storyline.” Also Read – Valimai box office collection day 9: Ajith Kumar-Huma Qureshi starrer enters the prestigious 200 crore club

Huma Qureshi also dropped a small hint about what viewers could expect from season 2, including a feeler of some major twists and turns lying in wait. “Season 2 will be bigger and better, with a lot of twists and turns,” she said. For the uninitiated, Maharani revolves around caste-based and other dirty politics in the state of Bihar, with Huma’s character, Rani Bharti, taking up the position of interim Chief Minister of the state after her husband and incumbent CM, Bheema Bharti, played by Soham Shah, gets badly wounded in an assassination attempt. As fate would have it, she ushers in an era of change in Bihar’s regime so much so as to go against the designs of her own husband. Also Read – Undekhi 2 web series review: Surya Sharma, Anchal Singh and gang return for another edge-of-the-seat cat-and-mouse game