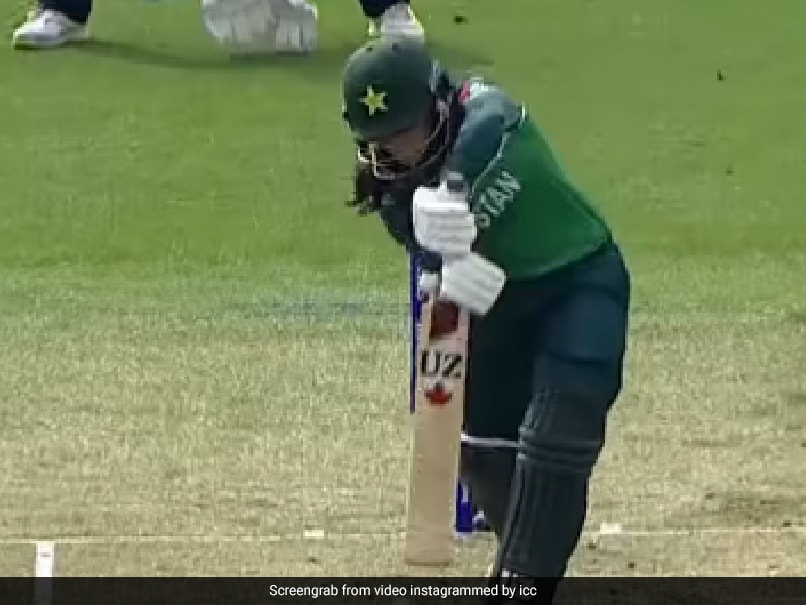 With only pride to play for, Sidra Ameen showcased some brilliant batting skills during Pakistan’s ongoing league stage fixture of the ongoing ICC Women’s Cricket World Cup, at Hagley Oval in Christchurch on Thursday. Although Pakistan were bowled out by England for 105 runs in 41.3 overs, the 29-year-old batter top-scored for her side with a knock of 32 runs off 77 balls. Ameen also smashed four fours, one of which caught the eye of the tournament’s official handle and led to comparisons with Sachin Tendulkar. In the second delivery of the 15th over, Ameen received a full delivery from Nat Sciver and she played a brilliant drive to direct the ball down the ground past the bowler’s left, beating mid-on. ICC and the tournament’s official Instagram handle posted a video of the shot and also compared it to Sachin’s trademark straight drive. The video has been captioned as, “Reminds you of someone, @sachintendulkar?”

Such was the beauty of the shot that even the commentator exclaimed, “That’s a nice shot. That’s a lovely shot”.

Here is the video of Ameen’s shot:

Other than Ameen, only two other batters managed to post double-figure scores against England. Omaima Sohail registered 11 runs off 30 balls and Sidra Nawaz managed to muster 23 runs off 44 deliveries.

Heather Knight and Kate Cross took a wicket each.

Pakistan will be seeking a consolation, and are out of contention for the semi-finals. They lost their first four games and then defeated West Indies in their previous fixture. They are also bottom of the league stage table.

Meanwhile, England lost their first three fixtures and then won back-to-back matches vs India and New Zealand to keep their semi-final hopes alive.

England will be aiming for a win against Pakistan and put in a challenge for the semi-final berths.