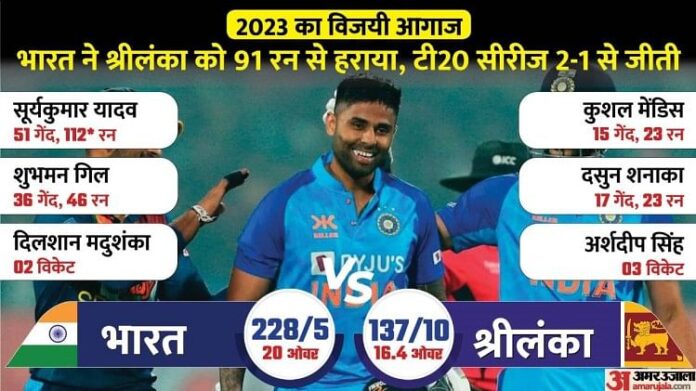 The Indian team has not lost in the 12th consecutive T20 series at its home ground. During this, 10 wins were won and two series were missed on the draw. In Rajkot, Indian captain Hardik Pandya won the toss and decided to bat first. Batting first, Team India scored 228 runs for five wickets in 20 overs. In reply, the Lankan team was reduced to 137 runs in 16.4 overs.

Ishan Kishan and Shubman Gill started India’s innings. Kishan became the victim of Dilshan Madushanka in the very first over. He scored one run. He could not score a single half-century in this series. Kishan scored 37 in the first T20 and two runs in the second.

Rahul Tripathi came to the crease after Kishan’s dismissal. He batted stormy as soon as he came. Tripathi hit 35 runs in 16 balls in a quick manner. He hit five fours and two sixes. Tripathi’s strike rate was 218.75. He was caught by Chamika Karunaratne at the hands of Madushanka. Tripathi shared a 51-run partnership for the second wicket with Shubman Gill.