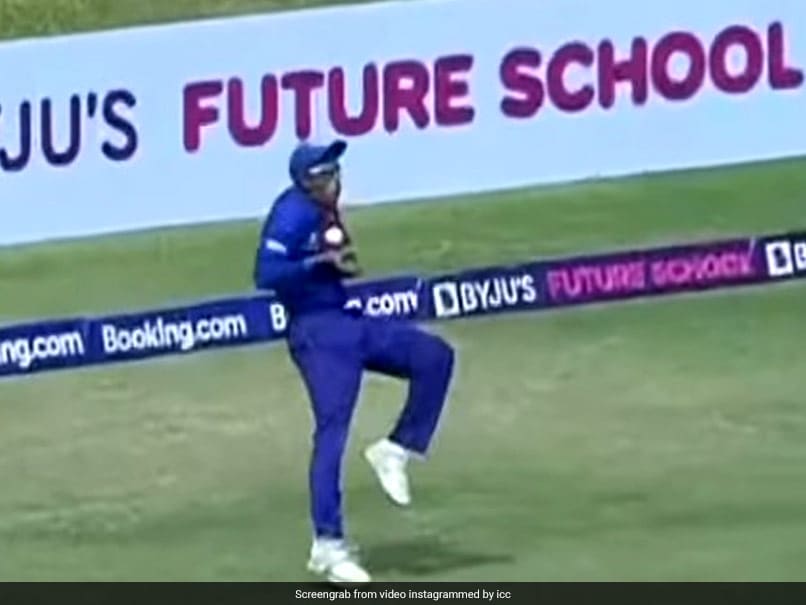 Kaushal Tambe took the crucial catch of James Rew in the U19 World Cup final.© Instagram

India’s Kaushal Tambe had a heart-in-the-mouth moment in the ICC U19 World Cup final against England on Saturday when he almost dropped a simple catch before recovering to take a one-handed stunner. Tambe was fielding in deep square leg when England’s James Rew, batting on 95, pulled a Ravi Kumar delivery towards him. Tambe almost spilled the ball while trying to take the catch but recovered in time to jump forward and take a stunning one-handed catch to send Rew back to the pavilion. The dismissal was crucial as it broke a 93-run wicket for England’s fourth wicket and India went on to take the remaining two wickets for just five more runs.

Watch the video of the catch here:

In the final, Raj Bawa picked five wickets and Ravi bagged four as India bowled England out for 189.

England crumbled in the first half of the innings before Rew’s gutsy fifty helped the side reach 189.

Opting to bat first, England got off to the worst possible start as India bowler Ravi picked two wickets (Jacob Bethell and Tom Prest) in the first four overs.

George Thomas and Rew tried to get the partnership going but Bawa dismissed the opener as India took control over the game.

England kept losing wickets at regular intervals and were soon found reeling at 61-6 in the 17th over.

Meanwhile, Rew kept fighting hard and scored a fifty to rescued England from the precarious position

Rew and James Sales put up a fifty-run stand to revive England’s innings. However, Rew fell five runs short of a century as Ravi removed him in the 44th over.

Rew’s wicket’s triggered a collapse and England lost two more wickets to set a target of 190 for India in the U-19 World Cup final.