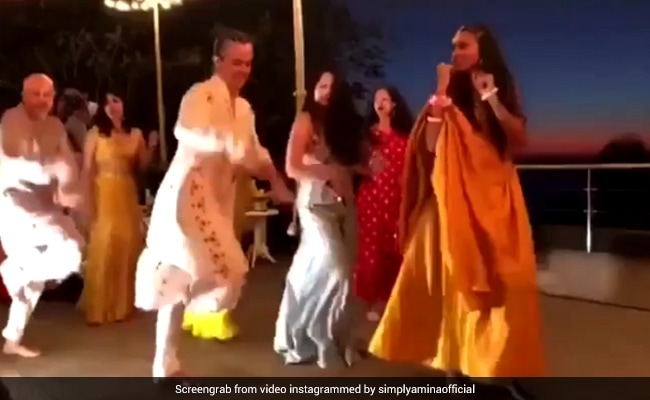 On Thursday, the pre-wedding festivities of Farhan Akhtar and Shibani Dandekar had begun with the mehendi function. A dance video from the ceremony has now gone viral on the web. In the video, Shibani’s friend and actress Rhea Chakraborty, sisters Anusha and Apeksha Dandekar are dancing to Dilwale Dulhaniya Le Jayenge’s iconic song Mehendi Laga Ke Rakhna. The mehendi function was held at Farhan Akhtar’s house in Mumbai and the guest list also included Shabana Azmi and Amrita Arora, among others. The theme of the function was yellow as almost every guest was dressed in yellow Indian outfits.

Check out the dance video from Farhan and Shibani’s mehendi:

Farhan Akhtar and Shibani Dandekar are getting married today in Khandala. They will get married in Javed Akhtar and Shabana Azmi’s Khandala house. It will be an intimate wedding with only close friends and family members. Earlier today, guests including Rhea Chakraborty, Anusha Dandekar, Ritesh Sidhwani, and others were clicked arriving at the wedding venue.

Farhan and Shibani first met on the sets of the reality show I Can Do It, which aired in 2015. While Farhan was hosting the show, Shibani was a participant. They started dating soon after and made their first public appearance as a couple during Ranveer Singh and Deepika Padukone’s wedding reception.

Shibani and Farhan share a good bond with each other’s families and are often seen attending functions and festivals together. Farhan Akhtar was earlier married to Adhuna Bhabani and they have two daughters. Farhan and Adhuna parted ways in 2017 and are now co-parenting their daughters