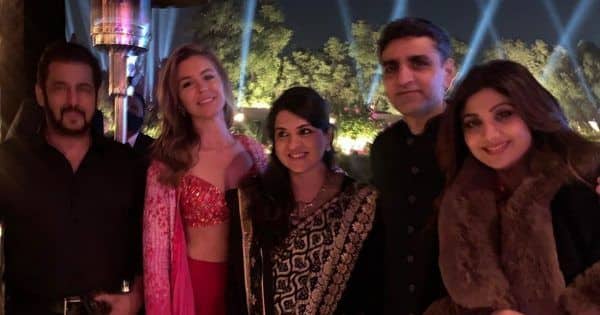 Hollywood actress Samantha Lockwood was recently spotted in India at casting director Mukesh Chhabra’s office. She was also seen visiting Farhan Akhtar’s Excel Entertainment office. However, what caught everyone’s attention, was her picture with Salman when they attended a wedding. Later, she was also spotted at the actor’s farmhouse for his 56th birthday celebrations. Soon, speculations of Samantha being Salman’s new girlfriend had started doing the rounds on social media. She has now finally spoken about her link-up with Salman Khan. Also Read – Bigg Boss 15: ‘Unfair eviction of Umar Riaz’ trends as Salman Khan announces his ouster from the house – read tweets

“I think people talk a lot. I think people can say a lot about nothing. I met Salman and he’s a very nice guy, that’s all there is to say about that. So I don’t know where people get that idea from. I mean I met him, I met Hrithik, nobody says anything about me and Hrithik. So I don’t know where this news comes from but obviously, it gets spun out of proportion,” Samantha told Bollywood Hungama. Also Read – Happy birthday Hrithik Roshan: Vikram Vedha, Fighter and other upcoming movies of the superstar that have blockbuster written all over them

Speaking about attending Salman’s birthday party at his Panvel farmhouse with his close friends and family, Samantha said, “For me, everybody was just another person because I don’t know anybody truly. I just knew Salman, I had met him a couple of times before that so really, to me, he was the only celebrity that I knew. Then I started meeting some of the other people and came to learn that they were actors or actresses or directors or producers and so on and so forth. So for me, it was a party with lovely people and then I came to learn who everybody was by being at the party. It was a lovely experience, everybody was just super nice and had nice conversations, a very elegant evening.”

Meanwhile, Salman will next be seen in YRF’s Tiger 3 opposite Katrina Kaif and will also have a cameo in Shah Rukh Khan’s Pathan.