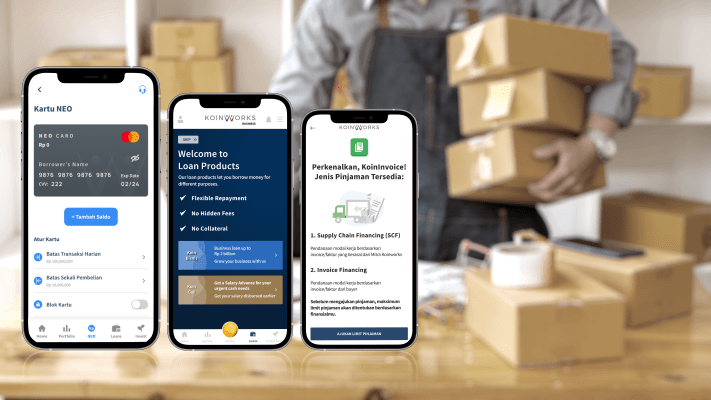 The backbone of Indonesia’s economy are its estimated more than 60 million SMEs. But many lack access to working capital and, especially before the pandemic, managed their finances using manual processes like spreadsheets. With COVID-19 prompting many to digitize, startups that focus on SMEs have been raising large rounds of funding to scale up quickly. KoinWorks is the latest. The Indonesia-based financial platform for SMEs announced today it has raised $108 million in Series C funding led by MDI Ventures. The round included $43 million in equity and $65 million in debt capital for the working capital loans KoinWorks provides to its customers.

The round brings KoinWorks’ total raised to $180 million. Existing investors who returned for its latest round include Quona Capital, Triodos Investment Management, Saison Capital, ACV and East Ventures. The new funds will be used for hiring about 400 new employees and scaling KoinWorks’ latest suite of products, SME Neobank.

KoinWorks is headquartered in Jakarta, with holding in Singapore and tech offices in Yogyakarta, India and Vietnam. KoinWorks was originally created to help SMEs, which are often turned away by traditional financial institutions, get access to working capital. Since then, it has also developed a comprehensive platform of financial tools to help its customers, including e-commerce vendors and social commerce sellers, increase their sales.

TechCrunch first profiled KoinWorks in 2019 when it raised $12 million for its lending platform. Demand increased as more businesses went online during the COVID-19 pandemic and the startup says its user base tripled to 1.5 million customers, and a waitlist of 100,000 SMEs who are being onboarded onto its new financial software. Co-founder and executive chairman Willy Arifin told TechCrunch in an email that since 2019, monthly loan disbursements have also tripled to nearly $50 million and revenue had quadrupled.

KoinWorks focuses on SMEs that are underserved by traditional financial institutions and may not have a bank account or credit cards. On the platform, users can create an online bank account and card, borrow working capital, and access accounting, point-of-sale, early wage access and human resources management systems tailored for small businesses.

Arifin said that since KoinWorks’ monthly disbursement rate reached $50 million a month, its take rate has grown enough that the company became cash flow positive earlier this year, and its non-performing loan (NPL) percentage is lower than 2%. He says banks serving traditional SMEs have at least double KoinWorks’ NPL. “As many as 20% of businesses shifted their sales channels offline to online during the pandemic, and 89% of businesses now use online channels to sell their products and services,” he said.

Over the last three years, KoinWorks’ competitors have grown to include other neobanks and startups that started out as accounting software but are expanding to include working capital loans and other financial services. Two notable examples included rivals BukuWarung and BukuKas, both of which have raised significant rounds of funding.

“When we started out, we were among hundreds of traditional financial institutions. Fast forward to the present day, we are seeing those same banks now undergo digitalization,” Arifin said. “Despite that, Indonesia’s yearly funding gap is $80 billion USD, so those who remain unbanked or underbanked are still at a disadvantage. There’s still a lot of room for improvement”

He added that with tens of millions of entrepreneurs in Indonesia, “it’s not a winner-takes-all market.” The top five banks in the country have a combined market value of close to $160 billion USD. There will undoubtedly be fintech companies out there tackling the unbanked/underbanked space, however, KoinWorks has a best in class approach tailored to the needs of SMEs and entrepreneurs that we believe will have a significant impact on the future sector.

In a statement, MDI Ventures CEO Donald Wiharia said, “Investing in KoinWorks is investing in the financial literacy of underbanked and underserved communities. We are ecstatic to be in concert with a team that understands the importance of each step in the journey of entrepreneurship and SME growth.“