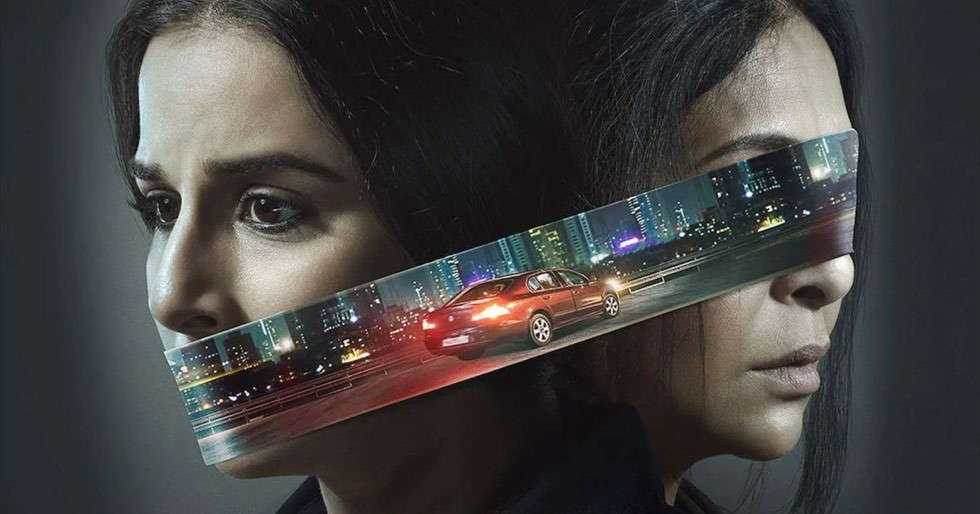 It’s said that the true test of character, of morality, is doing something right even when no one is looking. That’s the moral dilemma at the heart of this multi-layered film. As humans, we’re all prone to make mistakes. But what’s unique to us is the ability to rise above those mistakes and rectify them. We’re genetically coded to either flee or fight. But there’s a third response as well – that of trusting in life to make things right. All of us have to make all kinds of compromises but sometimes, it pays to take a stand for the sake of your soul. But can one afford to take the high road when survival is at stake? Isn’t it better to run away and live to fight another day. The film asks all sorts of spiky questions and thankfully, doesn’t totally spoon feed all the answers, letting the viewers draw their own conclusions.

Maya Menon (Vidya Balan) is an upright television reporter who is celebrating the success of a high TRP interview. She’s returning home late in the night at a time when her body is slowing down after the high. A girl steps in front of her car out of nowhere and is left bleeding on the road. Maya should have sought help, should have called the police, but decided to flee. She doesn’t know that the teenager she has hit is Alia (Kashish Rizwan), the daughter of her cook and maid Ruksana (Shefali Shah). Ruksana is a second mother of sorts to Maya’s autistic son Ayush (Surya Kasibhatla). Her younger son Imad (Shafeen Patel) is Ayush’s only friend. There’s a closeness between families despite the class divide, and that closeness comes under scrutiny as the film unfolds.

Maya shifts Alia to a high-end hospital and splurges on her recovery. She initially thinks it’s enough to gloss over her crime. But guilt is a beast which isn’t tamed easily. She starts hyperventilating at odd times. Her icy demeanour starts cracking as she teeters on the brink of an emotional breakdown. The police come into the picture at some point. Instead of investigating, they’re more keen on sweeping the matter under the carpet. They advise Ruksana and her husband to take compensation from the ‘influential people’ who have sent them and take back the complaint. Another tangent to the tale is rookie reporter Rohini (Vidhatri Bandi), who chances upon the video footage of the incident and is hesitant on how to proceed as the senior she looks up to is involved. She sees herself doing the wrong thing whatever course she takes and her redemption at the hands of Maya is one of the most moving aspects of the film.

But it’s Ruksana who really takes a trial by fire. She’s consumed by thoughts of revenge when she comes to know the truth. She can either be blinded by her rage or reach into her inner ducts of compassion and let things go. Neither choice is easy. And the audience experiences her anguish every step of the way.

The well-written, well executed film is a delight to watch. It not only entertains you – because at one level it’s also a taut thriller – but it also makes you question your own inner moral compass. You want to know what you’d do given the choices of the individuals present in the film. Would you succumb to impulse or let reason dictate your action?

We don’t see Rohini Hattangadi so often in our films. Filmmakers have forgotten her and that’s sad indeed. Because with this film she has again proved what a performer she is. She plays Vidya’s mother in the film and is the personification of a doting grandmother. Her confrontation scenes with Vidya are a delight to watch. Shefali Shah is a powerhouse performer in her own right and the way she naturally portrays Ruksana is beyond description. At the start, she’s the trusted servant, almost a part of her employer’s family. The accident jolts her back into her own world and she begins to see the chasm that exists between her and Maya. You see Ruksana’s helplessness in Shefali’s portrayal and also her resolve. Despite everything, love remains, and she submits to its grace. Nothing is spoken but everything is said through her eyes, her expressions. Vidya Balan is one of the finest actresses of her generation, of any generation. This fact has been proved time and again and is again reiterated through this film. Her Maya is the over achiever who should excel in everything, be it as a homemaker, as a single mother, or on the professional front. She prides herself on being always in control. But what happens when that control crumbles. You see Maya’s implosion in Vidya’s eyes, in her gestures. She almost turns into the monster she hunts through her headlines. Then, on the brink of madness, sanity prevails and through that comes clarity, comes resolve, comes redemption. The actor takes us through every stage felt by Maya and makes us root for her all the way. Take a bow, Vidya, for another masterclass.

All in all, director Suresh Triveni has given us a hugely satisfying film about choices that life offers us. Everything we chose has a consequence and that’s the point brought home by the film. The storyline is backed by solid performances not only by the two leads, Vidya Balan and Shefali Shah, but by the entire ensemble cast. Jalsa means celebration and the film truly is a celebration indeed of good filmmaking.

Story: An unfortunate incident turns renowned journalist-single mom Maya Menon (Vidya Balan) and her cook Ruksana’s (Shefali Shah) lives upside down. Through their predicament, Jalsa compels one to look within and challenges our notions of truth, morality and survival.
Review: Jalsa is a slow burn, intense drama that unfolds like a psychological thriller. It quietly observes the intricacies of human behaviour when pushed over the edge. Can humanity brave the storm of survival? Can circumstances override truth and conscience? Heath Ledger’s iconic line as the Joker comes to mind. “When the chips are down, these ‘civilized people’? They’ll eat each other.” Do they?

A gripping portrayal of guilt and self-reflection, Suresh Triveni puts inner conflict at the core of his story. He cleverly abstains from letting his two lead characters verbally confront each other and there lies its brilliance. One swamped with guilt, shame and remorse. The other, stifled with pain and anger. Between these two women, their deafening silences and muted chaos, we are compelled to find ourselves and their story.

Jalsa doesn’t resort to theatrics to get its point across. However, at one point, you do feel a tad restless wondering if this film might turn into a crime drama-police procedural. But despite certain loose ends on that front, Triveni sticks to exploring the psyche of his female leads, the everyday challenges of working women. They could be the privileged working class residing in high-rises, single moms or those from lower economic strata; everyone survives in their own way.

The story juxtaposes vulnerable lead characters — two women in their 40’s (brave rare feat for Hindi films). They belong to different social backgrounds but are bound by resilience and motherhood. Their inner turmoil and situational moral compass compels you to think. In a film that centres on the palpitating tension between the two, Vidya Balan and Shefali Shah are outstanding. It’s emotionally gratifying to watch these powerful actresses show what they are made of. Their eyes speak the words their voice withhold. Somewhere, they are similar in spite of their differences. Two scenes in particular stay with you. Shefali exploding with anger and Vidya watching the world around her pass her by as she grapples with reality. It’s nice to see acclaimed Hindi and Marathi film actress Rohini Hattangadi (as Maya’s mother) back on the screen. She lends gravitas and wisdom to the proceedings.

The film is technically and aesthetically strong and that also contributes to stirring up emotions. Triveni cleverly turns a lavish Mumbai apartment overlooking the sea into a haunting claustrophobic space of emotions and turmoil. Hues of blue, sounds and silences have a language of their own and they are most effectively used here. The roaring of lonely waves, flying curtains against the sea, grey skies, and an empty balcony; there’s an underlying melancholy that follows each frame of the film.

With a runtime of a little over two hours, Jalsa, a captivating drama with a complex moral center, keeps you on the edge of your seat for most part of the film. This one’s a must watch, all the more for its terrific climax.