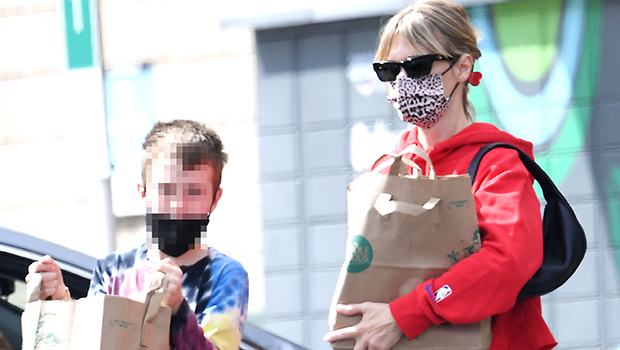 It’s not every day that January Jones and her young son, Xander Dane Jones, are spotted out and about. In a rare treat for fans, the ‘Mad Men’ star decided to take her boy grocery shopping at Whole Foods in L.A.

Time certainly flies. One day, January Jones is welcoming her son into the world, and the next, she’s taking him shopping, and he’s already ten years old. January, 44, and her boy, Xander Dane Jones, hit up a Whole Foods in Los Angeles on Sunday (Mar. 6). It marked a rare public outing for the Mad Men star and her son, as she has chosen to keep the young boy out of the spotlight. For this errand, January opted for a red Los Angeles Clippers hoodie, a pair of black pants, and some comfortable boots. She also wore a protective face mask, guarding against the COVID-19 pandemic.

Her son went on a more colorful route in terms of his outfit. The young lad sported a pair of dark green velvet track pants paired with a tie-dyed t-shirt. The clash of yellows and blues against the deep emerald was quite a statement, one that Xander capped off with a pair of sneakers. It was, apparently, the best outfit for helping your mom carry groceries since he did exactly that. Xander walked one of the bags full of goods out to the car while January handled the rest.

January gave birth to Xander in 2011, and she famously didn’t disclose the name of his father. “That’s my son’s business,” she told The New York Times in 2013. “It’s not the public’s business.” She related how Jack Nicholson once said to her that she “should never give your personal life away, otherwise people will pick you apart. They’ll never believe in your character.” She also is a bit playful with this mystique. . “Women should have lots of secrets,” she said, told the Times. “It’s our right to have secrets. Otherwise, what would we write in our memoirs?”

Though she is reserved in sharing more about her son’s life, she did post a now-deleted Instagram photo of her son protesting the murder of George Floyd. “I promise that I will always continue to talk to my child about inequality. And I promise to do all I can to learn more,” she wrote. January added that she wanted to “give [her son] an opportunity today to do a small neighborhood protest to support his friends and feel like he’s part of the progress that will hopefully happen.”