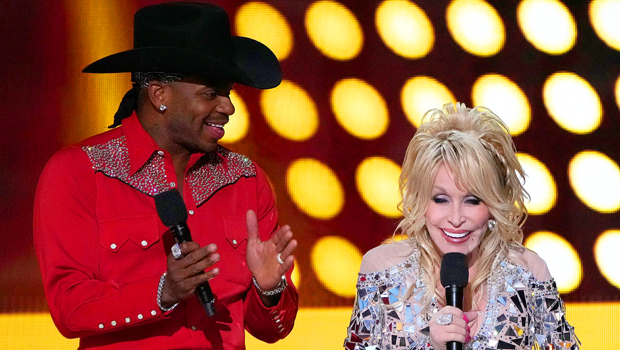 The country star complimented his co-host’s outfit, as they kicked off the Academy of Country Music Awards together.

How could you not be amazed by Dolly Parton? Jimmie Allen, 36, was extremely complimentary to the 75-year-old country icon during their opening to the Academy of Country Music Awards on Monday March 7. As Dolly rocked her silver sequin-jumpsuit, Jimmie let her know just how great she looked. “You’re like an Energizer Bunny but you look like a Playboy Bunny,” he said.

Dolly famously graced the cover of Playboy in 1978, but she’s re-created the famous cover on a number of occasions. She revealed that she was in talks to re-create it in October 2020. She even got into the famous bunny costume for new pictures for her husband Carl Thomas Dean’s birthday in July 2021.

Other than Jimmie’s sweet comments, Dolly also kicked off the show with solidarity for Ukraine, amid the country’s battle with Russia. “I don’t want to be political and this is not. I’d rather pass a kidney stone than do that. I want us to send our love and hope to our brothers and sisters in Ukraine,” she said. “Let’s dedicate this whole show to them and pray for peace around this crazy world.”

Other than Dolly and Jimmy, Gabby Barrett, 21, was also a co-host, and she and Jimmie  were each nominated for male and female Artists of the Year, respectively. For 2022, the most nominated artists of the year were Miranda Lambert, Carly Peace, Carrie Underwood, and Chris Young, who each had four nominations each. Miranda and Carrie both landed nominations in the coveted Entertainer of the Year category.

Other than the awards, the night is also loaded with tons of the biggest performers in country music rocking out onstage. Some of the previously announced performances included Thomas Rhett singing “Slow Down Summer,” Maren Morris performing “Circles Around This Town” and Chris Young doing “Raised On Country.” The show also featured plenty of tributes to the host with Kelly Clarkson singing Dolly’s classic “I Will Always Love You,” and the country icon teaming up with Kelsea Ballerini for “Big Dreams and Faded Jeans.” Some of the exciting up-and-comers to grace the stage including Ashley McBryde and the duos LOCASH the Brothers Osborne.

The ACMs have led to plenty of memorable moments in the past! Whether its incredible outfits or awe-inspiring performances, the country stars always bring their A-game to the annual celebration. Back during the 2021 awards show, Maren Moris celebrated her amazing evening (which included two wins) by dancing with (and twerking on) her husband Ryan Hurd. In a similar moment of joy, American Idol alum Cade Foehner gushed over his wife Gabby Barrett who took home the award for Best New Female Artist, shortly after the birth of their daughter. “What you don’t see is the way she makes this home and world of ours go round. You deserve all this and a whole lot more, dear Wife. Congratulations! We love our Mama!” he wrote on Instagram.