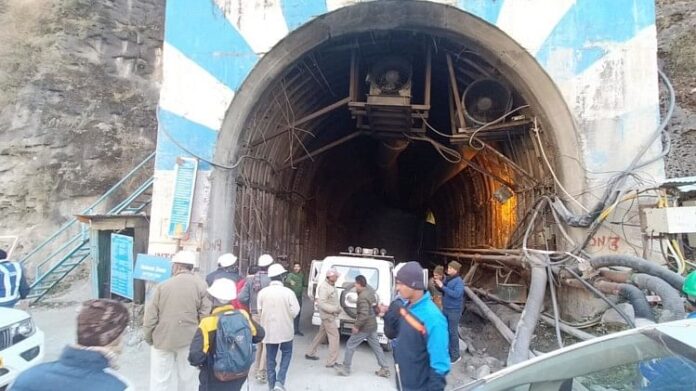 Encircled by all-round attacks, NTPC’s 520 MW Tapovan-Vishnugad hydropower project may be in trouble. The High Power Expert Committee of the Union Ministry of Jal Shakti, which is coming here on Monday to assess the landslide in Joshimath, will conduct a fresh investigation. Study of this project of NTPC is also on his agenda.

Joshimath: Cracking buildings of Joshimath will be divided into unsafe, safe and buffer zones…strategy will be decided after that

The local people of Joshimath have already started a war against NTPC. Scientists at the National Institute of Hydrology (NIH), Roorkee, are examining the water samples from the tunnel and the Joshimath leak. If both these samples match, then this project can also be locked.

Joshimath: …So did the ‘Hollow Structure’ cause cracks in the houses? Now ERT machine can open the ‘secret’ inside the earth

Actually, NTPC is building a 12 kilometer long tunnel from Tapovan to Vishnugad here. Tapovan is one end and Vishnugad is the other. Joshimath is situated on the slope of a high hill in the middle. NTPC plans to generate electricity from the water of Dhauliganga, a tributary river flowing in Tapovan. This water will come from Tapovan to NTPC’s power house Selang through the tunnel. After generating electricity, this water will be released into the Alaknanda river via Vishnugad stream.

At first glance, this project is not as easy as it looks. NTPC’s tunnel is being made by cutting ‘in situ rock’ in scientific language. In situ rock is the rock which has been in place for centuries. It is not a hill made of landslide debris i.e. stones, rocks or soil like Joshimath. The Mishra Committee has said in its 1976 report that Joshimath is not built on in-situ rock, but on rock made of landslide debris.

On the other hand, the local people are sure that somewhere there is a leakage from the tunnel, due to which the situation of landslide in Joshimath has become more serious. NTPC has tried to explain by issuing a detailed map that this is not possible at all. Because this tunnel is being built far away from Joshimath. Even if measured from the nearest border of the city, the tunnel is one kilometer away from the city. is far. Half of Joshimath city is in the grip of landslide. And this affected part is further 2-2.5 km away from the tunnel. It is not scientific to have side effects of a tunnel so far away. Their second argument is that as soon as the tunnel is made, it is protected with strong concrete so that not a drop of water leaks. NTPC’s third argument is that even twenty years have not yet been completed since the project started, whereas the signs of landslide in Joshimath were recorded by Edwin T. Atking in his Himalayan Gazetteer in 1886 AD itself.

Excavation of tunnel created additional pressure on the mountain

Ravi Chopra, former chairman of the High Power Committee (HPC) on the Allweather Char Dham Road project, now working for the environment, says that in 1976, the Mishra Committee had given a clear warning that this is a sensitive area. No major construction work should be started here. After all, this mountain is a part of Joshimath itself. If tunnels are made in the mountains then its effect will be visible. Which scientist of the world can deny this. We have created additional pressure on the mountain by digging a tunnel, which has punctured a large aquifer.

The NTPC Tapovan-Vishnugad hydropower project being built in the valley of Alaknanda, which gives huge amount of water to the holy Ganges, seems to have caught someone’s eye. NTPC’s lone Tunnel Boring Machine (TBM) has been stuck in the tunnel for the last ten years in this project that started in 2006 to generate 13.2 MW electricity from the water of Ganga’s tributary river. Then in February 2021, a large part of the project fell victim to a disaster in which about 150 laborers working in the tunnel were buried. NTPC has not yet recovered from this accident that now it is on the target of the citizens of Joshimath. The agitators of Joshimath allege that NTPC and its tunnel are actually responsible for the leakage of water in the city.

Machine inside tunnel for two years, allegation of explosion

To cut these in situ rocks, NTPC had to import tunnel boring machines (TBMs) worth crores of rupees from Germany. Which got stuck in the tunnel after cutting the mountain about eight kilometers from Tapovan. It is said that this tunnel is stuck in the middle tunnel for two years because this machine could not move back. NTPC is building a second manual tunnel to move this TBM again. NTPC built a power house in 2012 and a barrage in 2015 to stop the water. But the tunnel is not yet completed. Seeing this difficulty of the project, the local people are alleging that NTPC is now using explosives for the tunnel. While NTPC is clearly denying it.