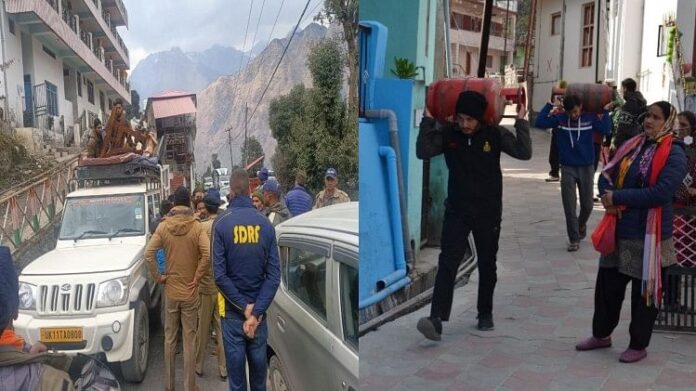 Cracks have appeared in 603 buildings in Joshimath. The buildings identified in the danger zone have been sealed. With this, today SDRF started the campaign to vacate the houses in Sui village, whereas in Manohar Bagh, the affected people started leaving their houses on their own. The affected have left with their belongings.

Today’s pictures that came out from Joshimath are making everyone emotional. People are leaving their homes with tears in their eyes and carrying memories. Secretary to Chief Minister R. Meenakshi Sundaram, sent to Joshimath on the instructions of Chief Minister Pushkar Singh Dhami, has instructed District Magistrate Himanshu Khurana to collect data about the buildings of the city and the people living in it in two days. At the same time, the High Power Committee of the Ministry of Jal Shakti has reached Joshimath.

The expert committee, which returned after studying from Joshimath on Saturday, has recommended the government to demolish those buildings at the earliest, which have developed a lot of cracks. The government has decided to demolish such buildings. However, every aspect is being considered before taking any hasty step.

Will collect this data by dividing it into three zones

Danger: Buildings that are very dilapidated and completely unsafe.

Buffer: Buildings that have minor cracks but are at risk of expansion.

Safe: Buildings that have no cracks and are safe to live in.

The team will also collect information about the affected

I will stay in Joshimath now. The district administration has been instructed to first divide the buildings into three zones. There are also many commercial buildings. Whether people would like to shift permanently away from Joshimath or not, after gathering information on all these aspects, we will work on further policy. R. Meenakshi Sundar, Secretary, (Chief Minister).