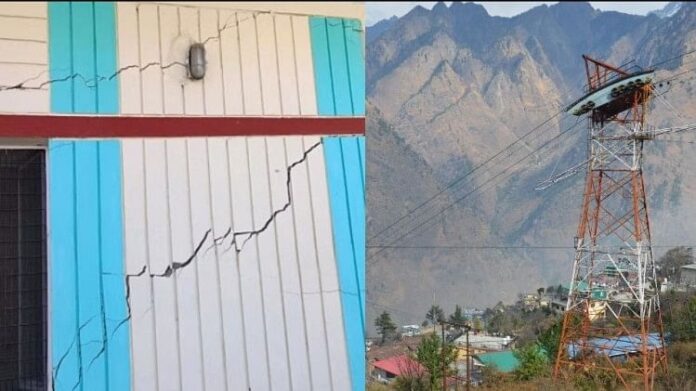 Asia’s biggest Joshimath-Auli ropeway is also in danger due to landslide. The situation is that one tower of the ropeway is in an area declared unsafe by the administration, due to which apprehensions about the ropeway have also increased.

The Joshimath-Auli ropeway has also been affected by the landslide in Joshimath. Where the administration has declared four wards as unsafe, Manohar Bagh ward is also there and a number tower of ropeway is installed here. Ropeway manager Dinesh Bhatt says that the tower of the ropeway is being regularly monitored every day. At present, there is no crack in the farm where the tower is located.

Joshimath: Seeing the crumbling houses, the victims said – everything is getting ruined in front of the eyes… pleading with the gods for protection

The cracked farm is some distance away. In view of the security, the administration has stopped the operation of the ropeway. Please tell that the distance of this ropeway from Joshimath to Auli is about four km, in which 10 towers are installed. It takes 15 minutes to reach Auli from Joshimath by ropeway. Ropeway remains the first choice of tourists to reach Auli.

The number of unsafe buildings is continuously increasing in Joshimath city. 75 more buildings were marked on Monday. A total of 678 buildings have been identified so far. The local administration and a team of experts have declared these buildings unsafe for habitation.

Now the administration has to vacate these houses soon so that people can be shifted to safer places. On Monday, 13 families were given shelter at safe places. So far, cracks have appeared in 678 houses out of 12,398 houses located in the city. On the other hand, the administration team is engaged in the task of identifying those houses which are completely unsafe to live in. The government has given instructions to complete this work by conducting a survey in the next two days.

There are cracks in these buildings

Ward Name No. of Buildings

Displaced families have been accommodated here

No. of Temporary Resident Households

Tax Slab: If there is an income of 10 lakhs, then how much tax will have to be paid in the old and new...