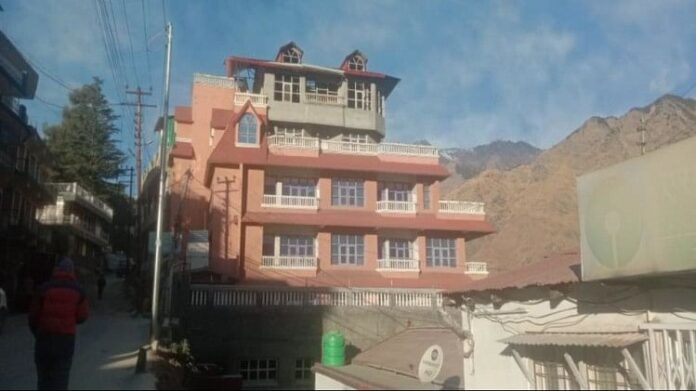 CBRI’s Dr. DP told that the team has inspected the inside and outside of the hotel. SDRF has been told to remove the belongings from inside the hotel. After which action will be taken to demolish the hotel in a phased manner. First the topmost floor will be demolished.

Congress workers protested in Dehradun today regarding the landslide in Joshimath. State President Karan Mahara and former State President Pritam Singh along with other leaders sat on a dharna outside the Chief Minister’s residence. During this, he demanded the government to convene an all-party meeting on the issue of Joshimath.

District Magistrate Himansh Khurana has issued orders for the immediate demolition of Hotel Malari Inn and Mount View under section 34T of the Joshimath Disaster Act 2005 for the safety of the general public.

Yoga guru Ramdev has come forward to provide relief to the families affected by the Joshimath disaster. From Kankhal’s Divya Yog Mandir, Swami Ramdev flagged off two trucks full of relief material to Joshimath. Two thousand blankets and ration materials have been sent by Patanjali Yogpeeth to help the affected families in Joshimath. Talking to the media after sending the relief material, Swami Ramdev said that Patanjali Yogpeeth is ready to help the victims of natural calamity. On Wednesday, Acharya Balkrishna will reach Joshimath and distribute relief material among the people. Swami Ramdev also appealed to other NGOs and organizations to come forward to help the people of Joshimath.

Minister of State for Defense Ajay Bhatt met the affected

Minister of State for Defense Ajay Bhatt, after inspecting the Army Camp, met the affected people in Sunil Ward. He assured the people that the Central and State Government would provide all possible help to rescue the people from this natural calamity.

Action will be taken to demolish the hotels in Joshimath shortly. The administration is continuously making announcements. The team of scientists of Central Building Research Institute (CBRI) is still waiting for action.

Union Minister of State for Defense Ajay Bhatt reached Joshimath today amidst the demolition of buildings. He visited the Army and ITBP headquarters to take stock of the situation there. After this, he will review the demolition work in Joshimath and hold a press conference.

The Supreme Court has refused an urgent hearing on the Joshimath case. The apex court has now given the next date of January 16 for hearing on this.

First these two hotels should be evaluated – Board of Trade

Thakur Singh Rana, owner of Hotel Malari Inn, said that I have a lot of trouble with the central and state government. This hotel is being demolished in public interest, no problem, I am with the administration. Just give me notice and get my financial assessment done, I will leave from here. I request a financial evaluation

The hotel will be demolished in a phased manner – Manikant Mishra

Uttarakhand: The work of demolishing hotels and houses in Joshimath which have more cracks will start from today. The areas declared as unsafe zones by the administration have been evacuated. SDRF Commandant Manikant Mishra said that Hotel Malari Inn will be demolished. It will be dropped in a phased manner. These hotels have become crooked. It is necessary to break it because there are many houses and hotels under it and if it sinks too much, it can collapse anytime. CBRI experts are coming, they will give more technical information.

The Supreme Court will today consider for urgent listing of the plea seeking declaration of Joshimath crisis as a national disaster. A bench of Chief Justice DY Chandrachud and Justice PS Narasimha on Monday asked advocate Parameshwara Nath Mishra, appearing for petitioner Swami Avimukteshwarananda Saraswati, to mention the matter on Tuesday. Taking up the matter before the bench on Monday, Mishra urged for an early hearing.

The process of demolishing the hotels will start shortly. Earlier, the administration made an announcement asking people to leave. At the same time, people are being warned not to unnecessarily come in the middle of the action.

Buildings will be demolished with mechanical technology

The help of explosives will not be taken for demolishing the buildings. Under the supervision of CBRI scientists, the Lonivi team will demolish the buildings with mechanical techniques. For this the help of laborers will be taken.

First two hotels will be demolished

First of all, Hotel Malari Inn and Mount View will be demolished. Action will be taken to break the hotel under the direction of the team of experts from Central Building Research Institute Roorkee and in the presence of NDRF, SDRF. First Hotel Malari Inn will be demolished. For this, along with 60 laborers, two JCBs, a big crane and two tipper trucks have been deployed.