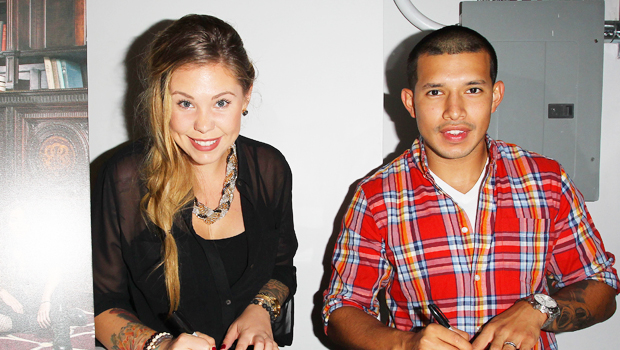 Kailyn Lowry and Javi Marroquin have had a difficult romance. Here we breakdown their relationship timeline, from falling in love to a tumultuous separation to working on co-parenting.

Kailyn Lowry and Javi Marroquin have had a love story for the ages, and fans of the pair have been able to catch up with all their drama on the MTV reality show Teen Mom 2, and, well, behind-the-scenes on social media and in the press. Below we break down their relationship timeline, from the early days of courtship to the trials of their divorce to trying to successfully co-parent for their son, Lincoln.

The beginnings of their love story

Kailyn initially met Javi back in 2011 when she was working at a mall in her native Pennsylvania. Although the reality star revealed she initially said no to his courting her, she eventually gave in and gave him her number after he continued to visit her and they began chatting on Twitter.

In 2018, Kailyn shared some more details about their beginnings with fans. “When I met Javi, he lied to me and told me he didn’t know who I was,” she tweeted at the time. “[I] creeped his Twitter and sure as s–t he had tweeted me a week prior. That was after he got picked to do True Life and the girl refused,” she stated, adding, “I was young and ignored red flags apparently. What most would call desperate.”

Denying her claims in a since-deleted tweet, Javi wrote, “Stop tweeting about me. Stop seeking validation. Move on, please. Like, we’re grown now … That’s for the birds.”

Despite this latter day lookback on events, the couple quickly went from an early flirtation to a serious relationship, as fans of Teen Mom 2 saw Javi meet Kailyn’s son Isaac, whom she shares with ex Jo Rivera, and eventually move in with the family. After eight months of dating, the pair got engaged and tied the knot on Sept. 4, 2012 in a small ceremony at a Pennsylvania court house. The family also moved to Delaware, to be near Javi’s Air Force base.

Fans of Teen Mom 2 know all too well the drama that’s infected Kailyn and Javi’s relationship since they made things official in 2012. Although the pair had a legitimate, intimate connection, they also had their fair share of conflict throughout, with fights that sometimes got physical. After Kailyn revealed a bipolar disorder diagnosis in 2013, she shoved him during season 3 on the show as they fought, screaming, “God, I f**king hate you,” to which Javi screamed back, “And that’s why we’re f**king breaking up.”

After giving birth to she and Javi’s first son, Lincoln Marshall Marroquin, on Nov. 16, 2013, the couple hit a rough spot and Kailyn suffered a miscarriage in late 2015. The tragic event was apparently one of the final straws for the couple, as Kailyn claimed Javi “blamed” her for losing the baby since he wanted another child so badly, according to InTouch.

“Love gets in the way of one’s vision sometimes that it’s not always the best choice,” Javi tweeted at the time, per The Hollywood Gossip, causing fans to wonder about the state of their marriage. Following the miscarriage, Javi was deployed to Qatar and the future of their marriage was uncertain.

They split in 2016 & subsequent drama ensued

While Javi was deployed in the middle east, Kailyn confirmed their split and would be filing for divorce. Moreover, she was seen walking the red carpet at the 2016 MTV VMAs with her ex Jo Rivera, noticeably without her wedding ring.

“We’re trying to do the best we can for our kids because they are what really matters,” she told Daily Mail at the time. Four years following the split, she admitted that her feelings for her on-again off-again boyfriend Chris Lopez lead her to file for divorce from Javi. By December 2016, the divorce was finalized. “It’s true, it’s been finalized,” Javi told Radar Online at the time. “I didn’t take her for child support because I do have 50/50 [custody] of Lincoln.” Javi also accused Kailyn of cheating on him while he was overseas.

During a later episode of her podcast, Baby Mamas No Drama, Kailyn revealed more details about what lead to she and Javi’s split. “What it boiled down to was completely different love languages,” she said. “Looking back, do I think it could have worked? Yeah, I think it could have worked but we were young and our love languages are very, very different.”

She added that while she and Javi seem to get along well these days, he doesn’t “keep his word,” although she did praise him for being a “great dad.”

Although Kailyn and Javi were no longer married, the drama still ensued between them, and often played out social media. Their very public fights lead to Kailyn filing a PFA (protection from abuse), although she later dropped the order.

The pair seemed to know their constant conflict was bad for their family, and decided to join We TV’s Marriage Boot Camp: Reality Stars in 2017. “I really hope that this marriage boot camp can help us figure out how to solve our issues because when I envisioned myself being married, I don’t think that I would ever have anticipated it being this troubled,” Kailyn said on the show. At the time, Javi was looking to get back together with his ex, but Kailyn was simply wanting to be amicable for the sake of co-parenting their son. Despite a few issues, they were successful in caring for their son and keeping things civil between them.

Although the couple officially called things off between them and focused on co-parenting, drama still ensued as Javi not only began seeing other women, but other women within the same Teen Mom universe. In Sept. 2017, Javi started dating Kailyn’s Teen Mom 2 co-star Briana DeJesus, a move that ignited a major feud between Briana and Kailyn. Javi and Kailyn were eventually able to work through their issues and Javi apologized to Kailyn after he and Briana ended up going their separate ways in Jan. 2018.

Following his split from Briana, Javi began seeing Lauren Comeau, and, in May 2018, the couple announced they were expecting their first child together. After Lauren gave birth to son Eli in November 2018, the couple got engaged in June 2019. Although Lauren now became a stepmother to Kailyn and Javi’s son, Lincoln, Kail apparently refused to have a relationship with the New England native due to her allegedly saying she was a “tw-t” in a text message to Javi.

Things eventually unraveled between Lauren and Javi when, in Oct. 2020, while fighting with Javi, Kailyn claimed to cameras he had asked her for sex while still engaged to Lauren. The bombshell reveal lead to Lauren and Javi’s breakup that same month, although Lauren didn’t confirm the split until 2021.

“I’m never gonna air dirty laundry on the internet. My mama raised me better than that,” Lauren said through tears during a Jan. 2021 Instagram live, following the news of Javi and Kailyn going shopping for a car together. “I do think I deserve to come on here and show some real f–king pain. I’m just here to pick up the pieces with my kid, stuck [in Delaware] with no family or friends.”

She added, “I just discovered something new today. It’s really, really disgusting and f–ked up and really disrespectful … and it’s just so sad. I feel so bad for me and my son.”

Despite their differences and turbulent love affair throughout the years, Javi and Kailyn are still trying to keep things civil between them to co-parent as best they can for their little one — and their children from other parents. During a July 2021 episode of her Coffee Convos podcast, Kailyn revealed how Javi stepped up for her during a moment of need. When her son Creed (whom she shares with ex Chris Lopez) was rushed to the ER after getting a major cut to his eyebrow while they were vacationing in the Dominican Republic, Javi was able to offer his Spanish speaking skills to help out her family.

“I had to call Javi for him to translate the whole thing because I was so upset … my Spanish has been good enough to get us around,” she shared. “I had never needed him to come through harder than what he did for me yesterday.”

It looks like they can finally be a part of the same team!