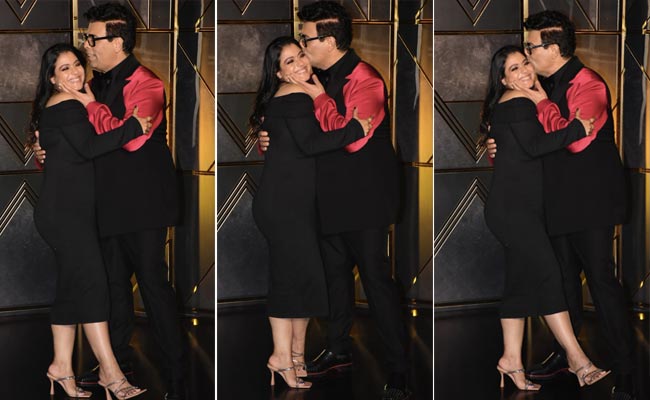 Kajol and Karan Johar at his party on Thursday

Party host Karan Johar didn’t pose for paparazzi pictures with most of the celebrity guests who were pictured at the grand birthday bash held for Dharma Productions CEO Apoorva Mehta in Mumbai on Thursday. He made an exception for the birthday boy and just one other invitee – Kajol. KJo and Kajol famously fell out after years of friendship and then made up again; at the party, it was clear that the rift is very much a thing of the past. Kajol, dressed in an LBD, was pulled in for a hug and a peck on the cheek by Karan Johar, a courtesy he extended to nobody else on camera. 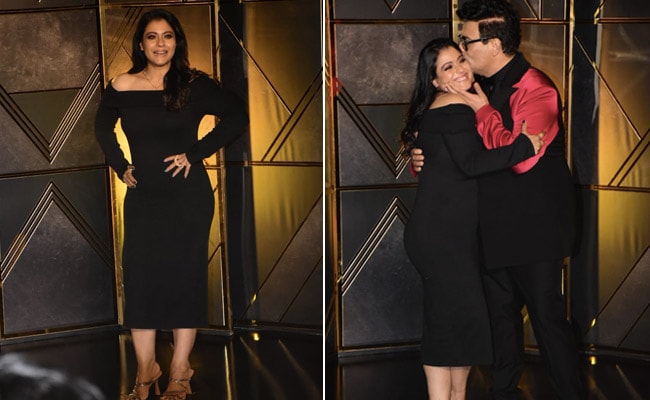 Kajol and Karan Johar have been friends for decades with Shah Rukh Khan forming a third – they worked together in Dilwale Dulhania Le Jayenge and then KJo directed them in Kuch Kuch Hota Hai, Kabhi Khushi Kabhie Gham and My Name Is Khan. Somewhere along the way, there was an interruption. In 2017, Karan Johar detailed the rift in his autobiography, writing, “I don’t have a relationship with Kajol anymore. We have had a fallout.” He laid the blame on Kajol’s husband Ajay Devgn, with whom there was a Twitter incident over their respective films Aye Dil Hai Mushkil and Shivaay which clashed at the box office. “The problem was actually never between her and me. It was between her husband and me, something which only she knows about, he knows about and I know about. But did feel that she needed to apologise for something she didn’t do. I felt that she’s not going to acknowledge 25 years of friendship, if she wants to support her husband, then that’s her prerogative,” KJo wrote.

“She can never come back to my life,” Karan Johar insisted in his book, “I wouldn’t like to give her a piece of myself to her at all because she’s killed every bit of emotion I had for her for 25 years. I don’t think she deserves me. I feel nothing for her anymore.”

Never say never because here we are. Just months after the release of Karan Johar’s book, the Internet noticed that he was following Kajol again on Instagram; she ‘liked’ a picture of his newly-arrived twins Roohi and Yash and then he showed up for her birthday party.

In absolute contrast to his written words, Karan Johar told news agency PTI, “Kajol is, has always been and will always remain more than special to me, for the time to come. Always.”

In case of doubt, see the pictures from Thursday’s party for reference.