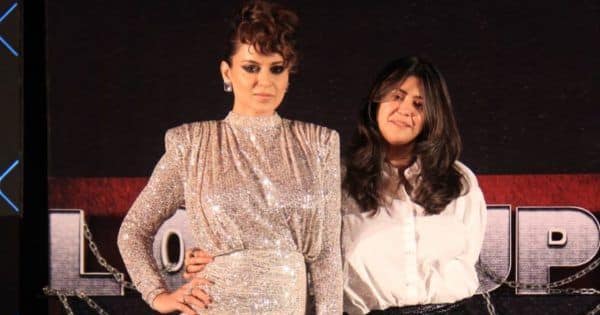 Lockup is going to be the title of the Kangana Ranaut reality show, produced by Ekta Kapoor. The Czarina of Indian television announced today, 3rd February, amidst the presence of a huge media contingent at the prestigious JW Marriot Hotel in Juhu, Mumbai, that her reality show will be a never before seen concept, unlike anything seen before not only on Indian television or the OTT platform but also in the West. Ekta Kapoor further revealed that the show is completely homebred and the concept was brought to her by two young, local boys. Also Read – Lock Upp: Kangana Ranaut reveals the kind of host she’ll be on Ekta Kapoor’s show; takes a dig at Salman Khan’s Bigg Boss?

So, will the show feature celebrities or common people as contestants? Ekta Kapoor revealed that it’ll only be celebrities, and without dropping names, she added that all have been vetted by her hostess, Kangana Ranaut, who’s likely having the final say on who’s going inside. Also Read – Lock Upp: Kangana Ranaut OTT reality show by Ekta Kapoor gets a title – here’s all you need to know

So what is Lockup all about? Ekta Kapoor revealed that it’s the first Indian reality show that’s completely homebred, where none of its content has been taken from any western show, which Indian reality programs are accustomed to indulge in. She added that a few young boys from a local community approached her with the concept and format of the show and she was floored with the idea as it has never been done before not only in the country but all over the globe.

Elaborating on the format of Lockup, both Ekta Kapoor and Kangana Ranaut said that it’ll involve sixteen contestants, all of whom will be locked up in jail cells, and though it’s a captive format, it’s unlike anything ever seen on Indian television or streaming services as they’re confident that a reality show of this nature hasn’t been showcased before (did they just take a dig at Bigg Boss)

Lockup will premiere simultaneously on MX Player and ALT Balaji by the end of February.