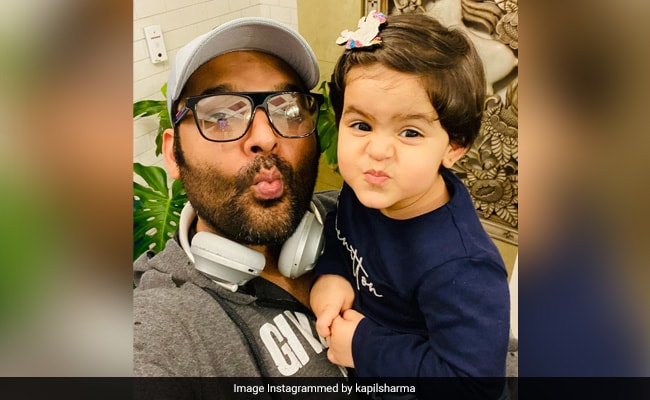 A munchkin has graced comedian Kapil Sharma’s Instagram page. Any guesses on the identity of the kid? Of course, it is Kapil Sharma’s daughter Anayra. The dad-daughter duo has made an appearance for their fans. Cuteness overload is what we call it. Here, we see Kapil Sharma carrying Anayra in his arms while the two look at the lens. The dad stands in a grey shirt, a white cap, headphones and a pair of glasses. And, he poses with a pout for the camera – surprise, surprise. Anayra also tries to copy her dad and twist her lips into a cute pout. In another photo, the father and the daughter share a sweet smile. Kapil Sharma just can’t get over these adorable snapshots. He captioned the post, “The cutest pout I have ever seen.” We agree, don’t we?

The munchkin’s pout caught the attention of various celebrities. Riddhima Kapoor Sahni commented, “So cute.” Comedians Bharti Singh and Chandan Prabhakar, who are also part of The Kapil Sharma Show, dropped heart icons in reaction to the post. Celebrity photographer Dabboo Ratnani came up with an amazing idea on seeing this post. He commented, “Let’s shoot together. Will plan something epic and get the kids too. Will do some adorable pics.” Fans are surely looking forward to it.

On Daughters’ Day last year, Kapil Sharma had uploaded another set of adorable photos featuring Anayra. And, she won our hearts in no time. In one photo, the little kid is festive ready in a yellow lehenga choli with colourful bangles and a decorated hairband. Next, she is smiling and posing for the camera in a pink dress. The funky sunglasses definitely make her look cuter. In the last slide, Anayra sits on a wooden bench and seems to be lost in her own happy thoughts. Kapil Sharma wrote, “Happy daughters day” and added a heart emoji.

On Father’s Day, Kapil Sharma posted a photo with his children, Anayra and son Trishaan.

Kapil Sharma and Ginni Chatrat got married on December 12, 2018. They are parents to two kids, Anayra and Trishaan.