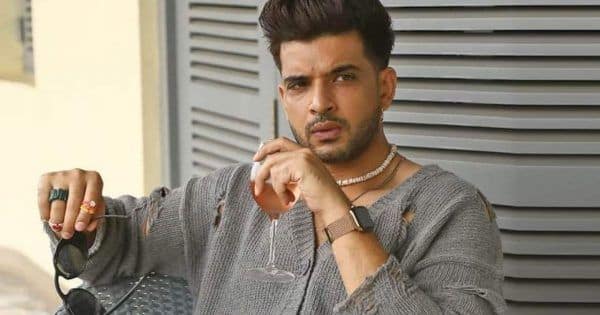 Bigg Boss 15 got over on Sunday. Tejasswi Prakash was declared as the winner. Pratik Sehajpal was the runner up while Karan Kundrra came third. Many were shocked to see Tejasswi lifting the trophy and felt that she was not deserving. Now, her boyfriend Karan had Instagram live session today. He revealed that immediately after getting out of the 5-star Bigg Boss 15 house, he sat on the footpath with his friend, Omi and drank chilled beer. He also said that he had butter chicken, for which he was craving inside the house. Karan stated, “Footpath pe baithkar beer piyi hai, mazzedaar raha, full feeling aayi hai, 5-star se nikalkar footpath par butter chicken khaya.” Fans are reacting on his statement. A fan wrote, “Jaise tu haara hai, tujhe desi pini chahiye thi.” Another one commented, “Oh really sun kar bahut dil ko karar aaya..lols… people.” Watch the video and read the comments below: Also Read – Tejasswi Prakash to Shehnaaz Gill, Celebrity contestants who Became popular and got big projects after participating in Bigg Boss, Watch List

He also spoke about meeting Umar Riaz and Tejasswi. He said, “I had to meet Umar Riaz yesterday but couldn’t because it got too late. I had to meet madam (Tejasswi) because it was her first day on set. We are talking a lot over the phone but I am dying to meet Umar. I am very happy I got a friend like Umar, Nishant.” He also thanks his fans and said, “I was very disappointed and was feeling destroyed after coming out of the Bigg Boss 15 house but when I saw the love and kindness showered upon me and my friends, I was overwhelmed. I will never be able to repay this. This is next level. I am proud of myself because of your love.” The entire video can be watched below: Also Read – Bigg Boss 15: Pratik Sehajpal opens up on his equation with Karan Kundrra; says, ‘I don’t have anything against him’ [Watch Exclusive Video]