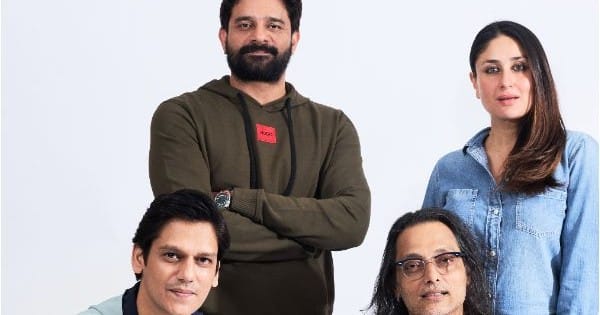 Kareena Kapoor Khan has Laal Singh Chaddha and Hansal Mehta’s next lined up, and today, her new project has been announced. The actress is all set to make her OTT debut with Netflix’s original film which will be directed by Sujoy Ghosh. The movie will be based on the book The Devotion of Suspect X. Last year, there were reports of Kareena starring in the adaptation of The Devotion of Suspect X, and now, finally, the movie has been officially announced. Also Read – Worst dressed celebs of the week: Kareena Kapoor Khan, Shamita Shetty, Madhuri Dixit Nene leave us sorely disappointed with their fashion choices

Netflix India took to Twitter to make an announcement about it. They posted, “We’ve got some Pretty Hot And Tempting news! Kareena Kapoor Khan stars in a thrilling new Netflix film with Jaideep Ahlawat & Vijay Varma, directed by Sujoy Ghosh! #KareenaKapoorKhan @JaideepAhlawat @MrVijayVarma. #12thStreetEntertainment & @NLFilmsIndia in association with #Boundscript and @kross_pictures present a Netflix Original directed by Sujoy Ghosh. Produced by @jayshewakramani & @PuriAkshai Produced by @sujoy_g & @HyunwooThomas.” Also Read – Aamir Khan reveals Kiran Rao and he separated ‘to give respect to the institution of marriage; talks about his cordial equation with ex-wives

In the video, Kareena enters the room and asks the team, are we doing the reading, what’s going on? The actress is also seen singing a couple of lines of the song Aa Jaane Jaan from the film Intaqam. Also Read – Alia Bhatt TRUMPS over Deepika Padukone, Katrina Kaif and other Bollywood actresses to be the MOST POPULAR Female star

The untitled movie also stars Jaideep Ahlawat and Vijay Varma. The Devotion of Suspect X by Keigo Higashino was launched in 2005 and it is regarded as Higashino’s best work so far. The book had won multiple awards, so let’s wait and watch whether the movie will do justice to the novel or not.

Meanwhile, Kareena’s Laal Singh Chaddha, which stars Aamir Khan in a pivotal role is all set to release on 11th August 2022. The actress will also be seen in a film which will be directed by Hansal Mehta and it will mark her debut as a producer.