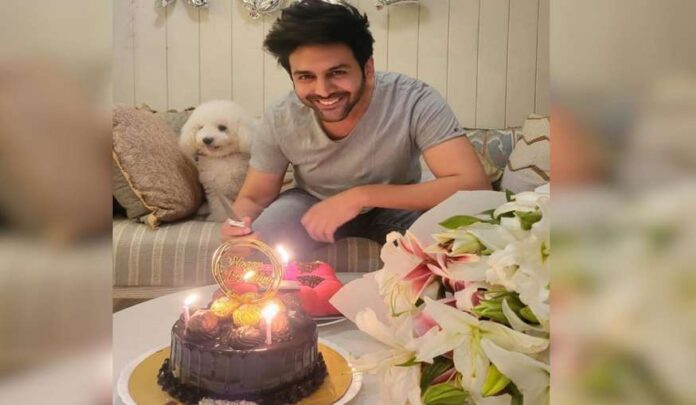 Bollywood’s chocolate boy Karthik Aryan is celebrating his 32nd birthday today. Kartik Aaryan has shared pictures of birthday celebrations on social media in which he is seen cutting the cake with his family. Born on November 22, 1990 in Gwalior, Madhya Pradesh, Karthik Aryan’s personality and killer smile keep fans hooked. Kartin wrote in the post with pictures of the birthday celebration, ‘I would like to be born as your Koki in every birth. Thank you Mummy-Papa, Katori and Kiki for this lovely surprise.

His cute dog is also seen in the first picture cutting the cake with Karthik Aryan. In the second picture, his parents are seen showering love on Karthik Aryan. On Karthik’s birthday, his parents had organized a surprise party, seeing which Karthik looked very happy. Karthik is fondly called as Koki at home. Karthik Aryan, who started his career in the year 2011 with the film ‘Pyaar Ka Punchnama’, released this year’s film ‘Bhool Bhulaiyaa 2’, which earned tremendously at the box office.

Karthik Aryan has carved a niche for himself in Bollywood without any godfather. In the film ‘Pyaar Ka Panchnama’, Karthik spoke a non-stop dialogue of about 5 minutes, which people still like. This dialogue of the film made Karthik famous. Karthik Aryan has given many hit films in his career so far. Karthik also has many big projects in the coming times. These days Karthik is busy shooting for his upcoming film ‘Satyaprem Ki Katha’. In this film, once again Kiara will be seen pairing with Karthik. Karthik Aryan will also be seen in the films ‘Freddy’, ‘Shehzada’ and ‘Captain’. Apart from this, Karthik Aryan is also getting a lot of headlines these days for the film ‘Hera Pheri 3’. According to the information, Kartik Aaryan is going to replace Bollywood player Akshay Kumar in this film.