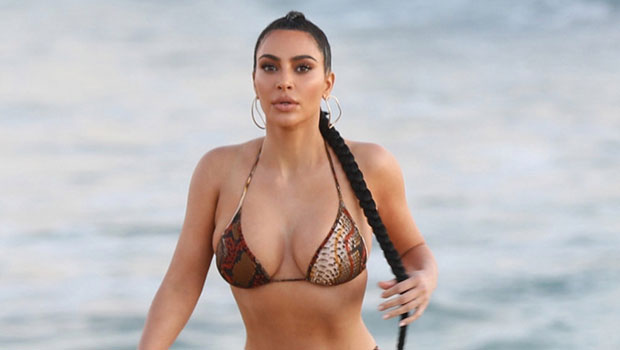 In a series of scintillating snaps, Kim showed off her insane revenge body as the bitter divorce battle continues with her estranged husband Kanye.

Kim Kardashian is never going to let the recent drama going on with her estranged husband Kanye West to keep her from living her best life! To prove the point, the makeup mogul, 42, put Kayne’s objection to her request to be legally single behind her as she gave her 286m Instagram followers a treat. In a series of scintillating snaps posted on Saturday (Feb. 19), Kim showed off her insane revenge body in a black bikini with the caption, “NITESWIM.”

The mother of four dared to impress with the jaw-dropping photos, as she put her flawless figure on display. The tiny swimsuit accentuated her curves, while she kept her trademark raven tresses slicked back in a high ponytail. For reasons unknown, Kim donned a pair of black leather gloves while swimming in the pool. She matched the accessories with a set of designer sunglasses. In one sassy snap, Kim threw up her middle fingers and stuck out her tongue towards the shutterbug.

Earlier in the week, Kim was met with the news that Kanye objected to her recent request to become legally single prior to their ongoing divorce being finalized. A source told HollywoodLife EXCLUSIVELY that she is “not at all happy with Kanye’s attempts to delay their divorce. She wants to dissolve this marriage as quickly as possible!”

Meanwhile, Kim is also dealing with Kanye trolling her new beau Pete Davidson. Last weekend, the rapper went after the Saturday Night Live comedian once again — and brought Pete’s BFF Machine Gun Kelly into the fold. Taking to his Instagram, Kanye shared an image of himself and Pete superimposed as Marvel comic book foes Venom and Carnage facing off in a cage match titled “Fight Night.” In the rambling caption for the incendiary Instagram, the “Famous” hitmaker also threw shade at MGK by suggesting “no one has heard a song” by the chart-topping musician.

Kanye’s Instagram shade follows a series of slams made against Pete and Kim, whom he recently accused of tearing their family apart in since-deleted posts. Kim and Pete began dating shortly after her SNL debut on Oct. 9. Meanwhile, Kim and Kanye split when the makeup mogul filed for divorce in Feb. 2021.