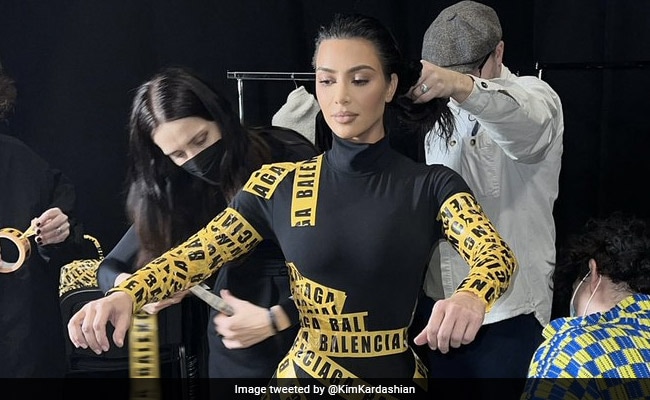 Kim Kardashian is always on the frontline when it comes to taking a fashion risk and she did it once again. First, a little background, the star attended the Balenciaga show at this year’s Paris Fashion Week recently and she did something unusual. She walked the ramp with Balenciaga’s designer packing tape wrapped around her body. As usual, the look supplied Twitter with a lifetime of memes. Kim Kardashian also had matching accessories to go with it. This, however is the story of what Twitter had to say about the look. Some of the reactions will surely crack you up. Take a look at some of the best reactions to her new look.

“This is a joke. This has to be a joke,” wrote a Twitter user.

This is a joke. This has to be a joke. #KimKardashianhttps://t.co/D8MM5dTF5W

How does that work?

But what if you need to pee tho #Balenciaga#Fashunpic.twitter.com/PYU6grryne

“When you force yourself in a size 6 pair of jeans when you’re really 10,” read a tweet.

When u force yourself in a size 6 pair of jeans when you’re really 10 #Balenciagahttps://t.co/Dzcqkciil9

I wanna know how Kim prepped for the #Balenciaga show

The struggle is real.

Fashion shouldn’t have to hurt #Balenciagapic.twitter.com/jnfG6ZWMJf

But then is there anything that Simpsons didn’t do first?

Sharing a BTS moment before the show, Kim Kardashian shared a picture of her look and she wrote: “Getting ready for Balenciaga.”

In Pic: some more details of Kim Kardashian’s look:

This is not the first time that Kim Kardashian has made headlines for her OOT look. Last year, at the Met Gala, she showed up in an all-black outfit that covered her face. The outfit was created by Demna Gvasalia, the creative director of Balenciaga. Kim’s OOTD also included a long train and she accessorised it with heels and wore her hair in a ponytail.

Kim Kardashian became a household name after she featured in the television reality series Keeping Up With The Kardashians. The former socialite has featured in films like Disaster Movie, Temptation: Confessions Of A Marriage Counselor, Deep In The Valley and Ocean’s 8. She also participated as a celebrity contestant in the dance reality show Dancing With The Stars.