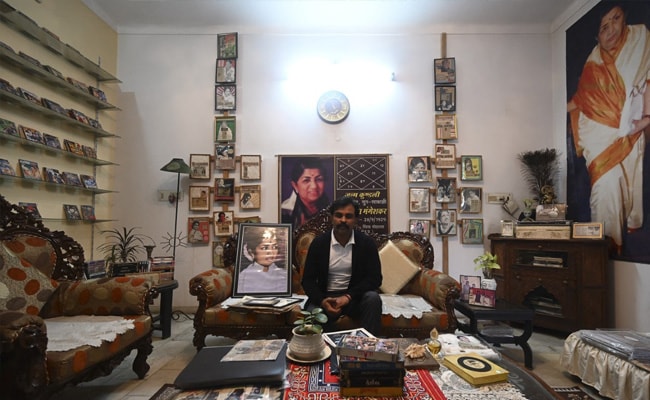 Beloved Bollywood singer Lata Mangeshkar’s legacy has been kept alive at a home museum curated by one of the much-mourned singer’s biggest admirers.

Lata Mangeshkar was known as the “Nightingale of India” and her melodies were an instantly recognisable feature of the country’s cinema, with her work appearing in more than 1,000 films.

The 92-year-old died Sunday and her body was cremated later that day in Mumbai, with Prime Minister Narendra Modi among the mourners laying flowers on her funeral pyre.

News of her death devastated Gaurav Sharma, a lifelong superfan who recalled meeting the songstress at her home nearly a decade ago.

“When I saw her for the first time, I felt she had some kind of incandescent glow around her,” the 38-year-old told AFP.

“She was so simple and down to earth. We talked for a long time. I got a lot of love from her.”

Mr Sharma maintains what could be the world’s largest collection of Lata Mangeshkar memorabilia at his house in UP’s Meerut, where he has meticulously catalogued thousands of compact discs, films and books featuring the singer.

A teacher by profession, Mr Sharma also has samples of the singer’s perfume, movie posters and almost every article on Lata Mangeshkar that has ever appeared in print.

“I even have the recording from 1974 when she sang at London’s Royal Albert Hall,” Mr Sharma said in an interview.

“She appeared in only one advertisement, which was for a cough syrup in the early days of her career, and I have that.”

The singer’s death cast a pall of gloom over the Sharma home, and he told AFP he could barely contain his tears at the news.

But Mr Sharma said he was taking heart from the fact that she would “continue to live amongst us” through the thousands of songs she sang over her storied career.

“Obviously I am devastated… But the show must go on,” he said.

“The body has its limits. But she will remain with us until this universe exists.”