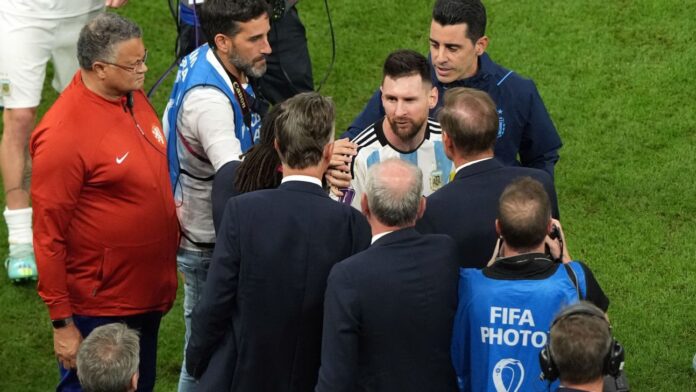 Lionel Messi said he felt “insulted” by Netherlands coach Louis van Gaal after reprimanding the referee Argentina India beat the Dutch 4-3 on penalties in a thrilling World Cup quarter-final at the Lusail Iconic Stadium in Qatar on Friday.

Messi assisted the first goal for Argentina Nahuel Molina and then scored a second goal from the penalty spot to give Argentina a 2–0 lead in the 73rd minute.

But two late goals from the Dutch substitute wout weghorstIn the 11th minute of stoppage time, a second ball followed by a free kick sent the match into extra time and eventually a penalty shootout.

However, the competition quickly heated up. at one point leandro paredes The ball was blown in the direction of the Netherlands bench in front of the Dutch captain virgil van dijk responded by knocking Paredes to the ground.

After his goal, Messi celebrated towards the Dutch coaching staff and then confronted Van Gaal after the match.

Messi told reporters, “I feel humiliated after Van Gaal’s comments before the game and that some Dutch players spoke too much during the game.”

Van Gaal suggested before the quarter-finals that Messi did little to help his team when he did not have the ball.

“Van Gaal sells that he plays good football and then he moves forward into the box and starts throwing long balls,” Messi added about Van Gaal’s tactics. “We deserved to go and that’s what happened.”

goalkeeper Emiliano MartinezJoe was the hero for Argentina in the shootout by saving the first two tries from the Netherlands virgil van dijk And steven barguisThere were similarly strong words for Van Gaal.

Martínez said, “I heard Van Gaal saying ‘we’ve got the penalty advantage, if we go to the penalty we win’.” “I think he needs to keep his mouth shut.”

“I don’t want to talk about the referee because you can’t be honest,” Messi told Argentine TV.

“If you talk that they penalize you, FIFA should think about it, they can’t keep referees who are not ready to act for these examples.”

Added Martinez: “I thought we controlled the game really well. We went 2-0 up but the referee started giving them everything.

“Suddenly a good header for him and everything turned upside down. The referee added 10 minutes for no reason.

“He gave them free kicks outside the box two, three times. He wanted them to score, that’s basically it, so hopefully we don’t have that referee anymore. He sucks.”

Argentina’s victory has put them through to their fifth World Cup semi-final and second in the last three tournaments, where they will face Brazilwinner of Croatia,

“We didn’t expect to go into extra time, let alone a penalty,” Messi said. “We were the victims, but we are playing a World Cup quarter-final.

“Argentina showed game by game that we know how to play. We came out with intensity and desire and we understood the moments of the game.

“We needed it and we are happy that the whole country is celebrating now. [Martinez] Showed once again that he is the best penalty saver.

“Croatia are a great team. They move the ball very well, they’ve been working together for a long time, it will be very tough.”