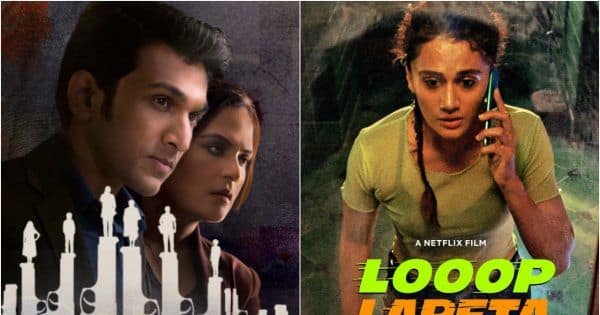 Taapsee Pannu and Tahir Raj Bhasin’s Looop Lapeta, Pratik Gandhi and Richa Chadha starrer The Great Indian Murder, and many other interesting films and web series are all set to release on OTT platforms this week. In January, we watched many films and series like 36 Farmhouse, Yeh Kaali Kaali Ankhein, Human, Cubicles season 2, and more. Now, in February also, audiences will have many options to watch on OTT. Below is the list of films and web series that releasing on OTT this week… Also Read – Deepika Padukone’s Gehraiyaan to Rajkummar Rao’s Badhaai Do – complete list of upcoming Bollywood movies in February

Taapsee Pannu and Tahir Raj Bhasin’s Looop Lapeta is all set to premiere on Netflix on 4th February 2022. The film is a remake of the German movie Run Lola Run, and the trailer of Taapsee starrer has grabbed the attention of the audience. Also Read – Taapsee Pannu says her boyfriend Mathias Boe’s equation with her father is ‘very respectful’

Pratik Gandhi, who rise to fame with the series Scam: 1992, is back with one more series titled The Great Indian Murder. It is based on the novel Six Suspects. The series, which starts streaming on Disney+ Hotstar on 4th Feb 2022, also stars Richa Chadha in the lead role.

Rocket Boy is a period series based on the lives of Dr. Vikram Sarabhai (Ishwak Singh) and Dr. Homi J. Bhabha (Jim Sarbh). It will premiere on Sony Liv on 4th Feb 2022.

Reacher is all set to start streaming on Amazon Prime Video from 4th February 2022. The series, which stars Alan Ritchson in the lead role, is based on Lee Child’s book Killing Floor.

Through My Window (Netflix)

Through My Window starring Julio Pena and Clara Galle is an adaptation of a 2016 novel by Ariana Godoy. It is directed by Marçal Forés, and the Spanish film will premiere on Netflix on 4th February.