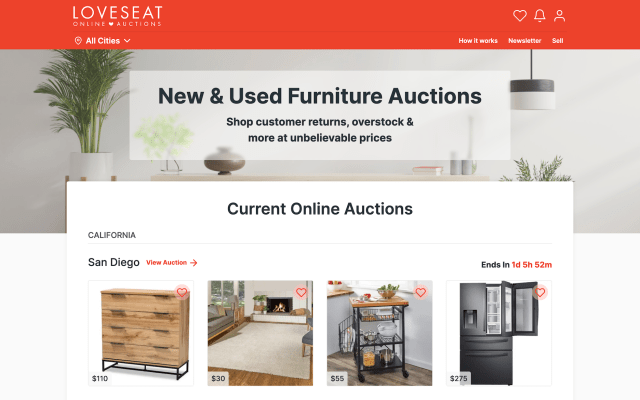 Oversized items, like furniture, have become a common fixture at the curb in weekly trash days, with the Environmental Protection Agency finding 80% ends up being disposed of in landfills.

Companies like FloorFound have found success in managing furniture returns, but hot on their heels is Loveseat, which also wants to improve that landfill statistic through its unique approach of an online returned goods marketplace where furniture is auctioned off locally.

Husband-and-wife co-founders Chris and Jenny Stanchak started Loveseat back in 2013 as a vintage furniture business in Los Angeles and San Diego. In January 2020, the company started having issues with securing inventory and decided to try doing truckloads of furniture returns, and when that worked well, pivoted the company.

“We just kept doing that over and over,” Chris Stanchak told TechCrunch. “There was more engagement, more participants and a higher price point. And that made sense because people want more contemporary stuff, not furniture that is too used or old.”

The pair have since moved to Austin and set up a marketplace there, while also continuing in LA, San Diego and Orange County.

Their mission is to eliminate waste in the returns supply chain, which Chris Stanchak estimates is a potential $30 billion market, where between 20% and 30% of items are returned.

“Retailers don’t like dealing with returns,” he added. “As people shifted purchases online, there are more remorseful returns, and it has become a big problem because you can’t just put it back in a box. The retailer has to send it back to the manufacturer, so our goal is to find a new home for it.”

Stanchak calls Loveseat, which sells customer returns or overstock inventory, a “liquidity machine.” It typically sells over 90% of the new items that go up on the marketplace each week.

Most of the items are 70% off on average, and as an auction, the items start at $10, Jenny Stanchak said.

“We have weekly auctions, so our customers are sticky, and they come back every week because items are new,” she added. “If you are the first person to check the auction at midnight, you can get an amazing deal. We have hundreds of people checking the auctions each week, and we will extend the auction timing if there are bids at the last minute to make it like a game. We end up having a 55% repeat rate on customer purchases.”

Loveseat hasn’t had to do much marketing, relying mostly on word of mouth, and in its second month of the marketplace going live in Austin, the market was profitable, Chris Stanchak said.

As such, the couple would like to expand its footprint in its current four markets and launch into others, so they went after a round of venture capital and raised $7 million in Series A funding to jumpstart that growth.

The capital injection was led by Bessemer Venture Partners, with participation from a group of angel investors, including Gokul Rajaram, Gabriel Weinberg and Kal Vepuri.

In addition to market expansion, Chris Stanchak expects to use the new funding to round out the leadership team and bring in operations, finance and inventory sourcing talent. He plans to be throughout Texas within the year and enter another state with ultimate plans of being nationwide. The company is also looking to bring the same auction model to electronics and apparel in the future.

Meanwhile, with every market profitable, the company itself is heading that way as well, Chris Stanchak said. The goal is to triple its revenue this year, which is a similar trajectory from previous years. He is also aiming for bigger results from its next market in terms of auction size and dollar values.

Talia Goldberg, partner at Bessemer Venture Partners, said she doesn’t typically invest in companies with inventory, but the more she dug into Loveseat, the more their model was attractive and answered concerns the firm had of retail-oriented models. And rather than be like Craigslist, the company’s value proposition focuses on new inventory, which is what consumers want, she added.

Goldberg called the Stanchaks “amazing” and a “great balance in terms of their skillset and ability to be scrappy over the past couple of years.”

“The company hasn’t needed to invest in marketing, customer acquisition or retail stores,” Goldberg added. “Once people see the value proposition, they share it and have a fun, gamified experience, which helps to move inventory. Other models have inventory on hand, but this is more scalable, they are able to do so in a way that leads to a model that is attractive and something we look for in a marketplace.”