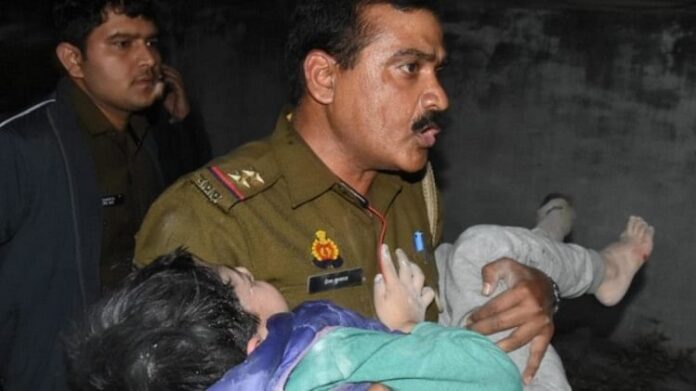 The child was evacuated after the accident
Photo: amar ujala

A five-storey apartment on Wazir Hasan Road in Lucknow collapsed like a pack of cards in a horrific accident on Tuesday evening. There were about 12 flats in the five-storey building. Families were living in all of them. More than 50 people were buried in the accident that took place at around 6:15 pm. The rescue operation was started here by the National Disaster Response Force (NDRF) along with the police and fire department at around eight o’clock. Deputy Chief Minister Brijesh Pathak himself, Urban Development Minister AK Sharma along with senior officials of the government, administration, police reached for the rescue work. Eyewitnesses say that digging work was going on in the parking lot on the ground floor. In this, drilling was being done by the builder. When the accident happened Even at that time people heard the sounds of drilling. Army was also deployed late in the night.

By late night, about 15 people have been evacuated and sent to Civil Hospital and Trauma Center for treatment. Women, children and the elderly are among the victims. In this, some families are also said to be related to senior leaders of political parties. The mother and wife of SP spokesperson Haider Abbas are buried under the debris. His father Amir Haider and son Mustafa were taken out safely. He himself remained outside pleading with the authorities to save his family. The building, named Alaya Apartments on Wazir Hasan Road, was built about 15 years ago by Yazdan Builders. Officials say that families had started living in this building illegally without getting the map approved many years back. What is the reason for the collapse of the building? It is being investigated.

On Wazir Hasan Road where this Alaya Apartment is built. The main road there is only 12 meters wide. At the same time, there was not even a six meter path to reach the apartment complex inside. In such a situation, the rescue teams had to break the boundary wall of another apartment Birawan House and another adjacent road inside. Only after this the work of evacuating people could begin. Alam was that due to vehicles parked outside on the road, apart from fire brigade, NDRF, SDRF, even ambulance vehicles were not able to reach. In this situation, the police had to struggle.

Deputy CM Brijesh Pathak reached the spot. He says that the accident is sad. Why did the building collapse? It will be investigated. Right now our priority is to rescue the people trapped inside. Deputy CM alerted all the hospitals in the city. Immediately instructed the doctors to come on duty. He also ordered to contact all the blood banks to arrange for sufficient blood.

Immediately after the accident, Chief Minister Yogi Adityanath himself took an update on the whole incident from DM Surya Pal Gangwar. Instructions were also given to speed up the rescue work. At the same time, senior officials of the government also reached the spot. Among them, Principal Secretary Information and Home Sanjay Prasad, DGP DS Chauhan, Divisional Commissioner Dr. Roshan Jacob, Commissioner of Police SB Shirdkar also reached the spot.