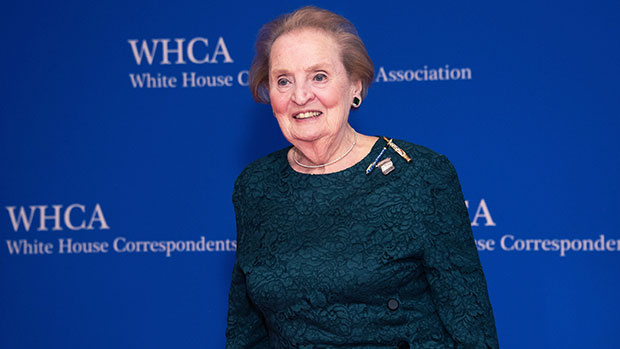 Madeleine Albright was part of President Bill Clinton’s cabinet from 1997 to 2001. Find out everything you need to know about her.

Former Secretary of State Madeleine Albright died following a battle with cancer on Wednesday March 23 at age 84. Her family released a statement sharing the news of her passing, revealing that she was surrounded by her friends and family. “we have lost a loving mother, grandmother, sister, aunt, and friend,” her family said in the statement. Albright was an incredibly important important figure in the history of the United States, serving as an ambassador and Secretary of State for former President Bill Clinton. Here are five important things you need to know about Madeleine Albright.

Below is a statement from the family of @Madeleine: pic.twitter.com/C7Xt0EN5c9

1. Albright was the first female Secretary of State

Madeleine Albright is best-known for her time as the Secretary of State during Clinton’s administration. She was the first woman to hold the position, and it was the highest ranked position that a woman had held in the U.S. at the time. Since holding the position, two other women have held the position of Secretary of State: Condoleezza Rice and former First Lady Hillary Clinton. During her time in office, she had fought to expand NATO, according to The New York Times. “As secretary, I will do my best to talk about foreign policy not in abstract terms, but in human terms and bipartisan terms,” she’d said at the time. “We cannot pursue policies abroad that are not understood and supported here at home.” Clinton wasn’t the first president that she worked for though. She began her career in national politics as a member of the National Security Council during President Jimmy Carter’s administration. After Ronald Reagan took office, Albright took positions with the Woodrow Wilson International Center for Scholars and later Georgetown University.

2. She formed a strategy firm after her time in the Cabinet

After her time as Secretary of State, Albright formed what would become the Albright Stonebridge Group in 2001. The firm helps businesses and financial organizations with global strategies and even assists with government advocacy. Many people who worked for the firm went on to work for the Biden administration, per Politico. Some of the firm’s past clients include Pfizer, Amazon, Lyft, Microsoft, the Bill & Melinda Gates Foundation, Hilton, and the Mayo Clinic.

Other than beginning the Albright Stonebridge Group, she was also made a distinguished professor at Georgetown, where she taught the Practice of Diplomacy. She’s also served as a chair on a variety of boards, and she’s written a number of books (seven New York Times bestsellers), including a memoir called Madam Secretary, according to her bio.

3. She was the U.S. Ambassador to the United Nations

Before she was appointed as Secretary of State, Albright had been the United States’ ambassador to the United Nations, a position that she’d also been appointed to by Clinton. During her time, she tried to convince the U.S. to take action against the Rwandan genocide. Decades later, Albright called it her “greatest regret” from that time in a 2016 interview with Frontline. “I wish it had been possible for us to do more, and President Clinton has said how much he has regretted it,” she said. “I have been to Rwanda many times. I went and I met with orphans and widows. I went to see the mass graves. I saw the blood in the stadiums. So it’s just a horrible, horrible story.”

4. She spoke out against Russia’s attacks on Ukraine

In one of her final pieces of writing, Albright wrote a scathing criticism of Russian President Vladimir Putin right before his forces invaded Ukraine. Her op-ed was published in The New York Times on February 23, the day before Russia launched an attack on Ukraine. “Should he invade, it will be a historic error,” she wrote, before warning about all the consequences Russia would face from an attack. “What is sure to be a bloody and catastrophic war will drain Russian resources and cost Russian lives — while creating an urgent incentive for Europe to slash its dangerous reliance on Russian energy.”

Albright finished her piece by showing support for Ukraine and warning against the country being overtaken by Russia. “Ukraine is entitled to its sovereignty, no matter who its neighbors happen to be,” she wrote. “It defines the difference between a world governed by the rule of law and one answerable to no rules at all.”

5. She’s a descendant of Holocaust survivors

Albright was born in Czechoslovakia to Jewish parents, who converted to Catholicism when Albright was a young child. Her parents fled from the country when she was two as Adolf Hitler’s troops invaded, according to The Washington Post. She didn’t know her family’s history until she was much older and about to become Secretary of State in 1997. Upon learning about her family’s Jewish heritage, she also learned that she’d lost relatives in the Holocaust, including three grandparents. She called it a “major surprise” in an interview at the time. “I was shocked and, to be honest, embarrassed to discover that I had not known my family history better,” she said in a 2012 memoir, per Politico.

She also explained why she felt her parents didn’t tell her about her Jewish heritage and how she didn’t feel that she could be a part of the Jewish community having lived so much of her life outside of it. “Perhaps that is why my parents never found a good time to discuss the decision with me and seemed to avoid doing so with others. Before the slaughter of 6 million Jews, they might have found the words; after it, they could not,” she wrote. “I am a firm admirer of the Jewish tradition but could not – beginning at the age of 59 – feel myself fully a part of it.”