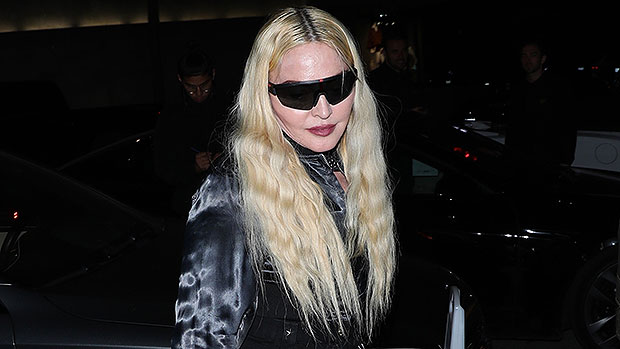 Madonna proved that she’s still got it during a night out on St. Patrick’s Day. The 63-year-old singer rocked an edgy ensemble wearing a leather jacket, black pants with braces and a choker. She also kept some of her signature style wearing a lacy bra top, black gloves and a bedazzled cross necklace. The “Material Girl” singer glowed as her youthful complexion beamed in the night against her wrap-around sunglasses.

The songstress strutted down the streets of West Hollywood as she headed to dinner at Craig’s. She was not alone though! The “Like A Virgin” singer was spotted with a male companion who has yet to be identified. This outing comes just after Madonna was spotted out with her estranged son Rocco Richie whom she shares with Guy Richie. The two went out for a night of fun at Harry’s Bar in London.

Madonna is certainly not afraid to show off her assets, even if it has brought her some backlash. She recently posted pics from a sexy car photoshoot that left very little to the imagination. In one pic she leaned against her car door exposing her derriere as she wore nothing but lacy panties and fishnet tights. However, not everyone was a fan. Rapper Nelly commented on the pic, writing,  “Something’s should just be left covered up,” along with a facepalm emoji.

Nelly’s not the first rapper to body shame Madonna. She uploaded another set of booty pics back in December and it’s safe to say that 50 Cent was not a fan.“That’s Madonna under the bed trying to do like a virgin at 63. she shot out, if she don’t get her old ass up. LMFAO,” he wrote in the comments. The “4 Minutes” singer wasn’t having it. “Here is 50 Cent pretending to be my friend,” Madonna clapped back while posting a photo of her and the rapper.

She continued, “Now you decided to talk smack about me! I guess your new career Is getting attention by trying to humiliate others on social media. The least elevated choice you could make as an artist and an adult. [You’re] just jealous you won’t look as good as me or have as much fun when you are my age! Too bad there are no sour grapes emogees.” 50 Cent has since apologized and even though she called his apology “fake,” she forgave him.