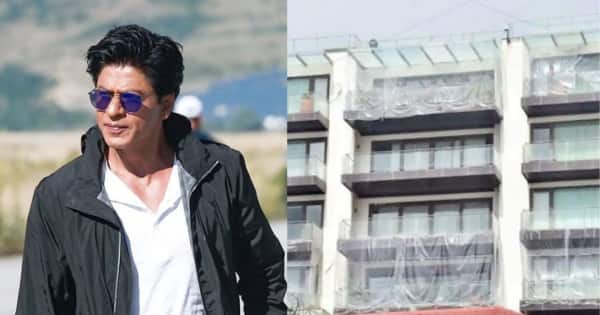 In a shocking turn of events, Shah Rukh Khan‘s had been under a threat. the luxurious abode of the Bollywood superstar is a sight to behold. Fans accumulate outside SRK’s residence on various occasions to catch a glimpse of the Raees actor. However, recently, Mannat was named as a location for the bombing. It so happened that last week, Maharashtra police received a call from an unknown person. The person claimed that he will be carrying out multiple bomb blasts at popular places in Mumbai. And the names included King Khan’s lovely and spacious abode Mannat. Also Read – Is Salman Khan, Shah Rukh Khan and Aamir Khan’s era over? Kamaal R Khan takes a nasty dig on the ‘superstars’

Obviously, such threats are not taken lightly by the police. It created chaos indeed but the police were adept enough to act quickly on it. And now, the latest reports have claimed that the person who made the call has been arrested. The unidentified caller goes by the name of Jitesh Thakur, a report in Lehren said, quoted Koimoi.com. The caller is said to be a resident of the Jabalpur district in Madhya Pradesh. Also Read – Trending ENT news today: Salman Khan’s Tiger 3 to get delayed, Kangana Ranaut reacts to Prime Minister Narendra Modi’s security lapse and more

When Maharashtra Police alerted Jabalpur district police, they acted on it quickly and nabbed the man. “We received a call from the Maharashtra police saying that a call claiming to carry terrorist attacks was made from Jabalpur. They sought our help in arresting the man. We have picked him up and have booked him under relevant sections of the Indian Penal Code,” CSP Alok Sharma said, quoted the publication. Also Read – Suhana Khan sets internet on fire as she poses in animal print dress; Shanaya Kapoor, Ananya Panday can’t stop ogling [VIEW HERE]

Furthermore, the CSP added, “When we arrested him, we found that he is a regular offender. In the past too, he has made drunk fake calls on the CM Helpline and Dial 100.” The CSP added that the accused would have made a drunk call and that his personal life was in turmoil. “He does not have any motive. He often gets drunk and then makes these calls. We found out that his married life has not been going smooth because of which he has been disturbed lately.”

It is said that Jitesh has been booked under sections of 182, 505 and 506 of the IPC. He is currently in the custody of Jabalpur police.