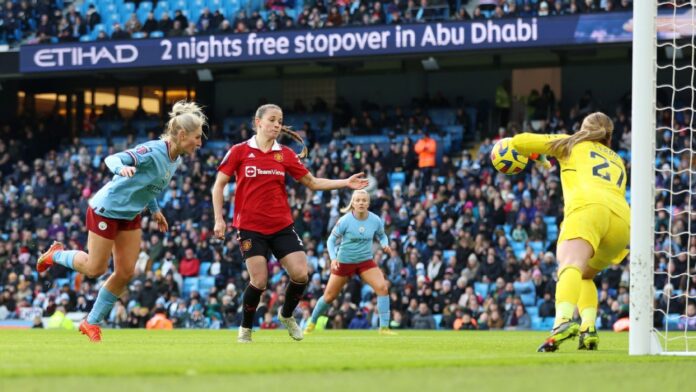 Manchester City salvaged a derby day point in a 1-1 draw against Manchester United in the Women’s Super League thanks to a superb header from Laura Combes after opening the scoring for the visitors at the Etihad Stadium.

The game was played in front of a crowd of 44,259 – a record attendance for a City Women’s match – and those fans witnessed an evenly matched battle between the two Manchester teams.

City boss Gareth Taylor said, “It felt like a cup final today, not a WSL game.” “The energy and the effort and at times the quality was at a really good level.”

Despite seeing little of the ball during the opening exchanges, it was United who opened the scoring on 27 minutes, with the visitors taking advantage of their opponent’s narrow defence. After some neat conversation with Ella Toon, Galton pulled the trigger from inside the box, the ball deflecting off Alex Greenwood to wrong foot City goalkeeper Ellie Roebuck.

The remaining half highlighted how well United were balanced at the moment, both up and down and left to right, as the team spread themselves across the vast Etihad pitch. The visitors began to control the match, pulling the home defense out of position while looking hard for breaks.

The visitors could have easily made it two when Hannah Blundell ran forward with the ball, looking to play Nikita Parisi in a one-on-one with the goalkeeper, the move being snuffed out by an expertly timed sliding challenge from Leila Ouahabi.

City showed renewed vigor in the second half as they began to probe in and around the United defense and find gaps that were not there before.

A floating cross from Chloe Kelly drew the sides level as the defense failed to pick on Combs when she forced her way into the box and powered a header home after Bunny Shaw lost his connection at the near post.

More confident after their goal, the hosts leaned back on their strong league history against United, the blue half of Manchester coming into the tie without conceding a point to their neighbours. The United defense that had looked so composed so far this season suddenly began to falter as the hosts looked for the winning goal, Kelly coming close after the hour.

As the game wound down in the final ten minutes, chances began to mount for both sides, with Martha Thomas defending well from Roebuck at the other end before Shaw came on at one end. With chances still flying in stoppage time, United had a legitimate claim to a penalty kick after Alex Greenwood appeared to handle the ball in the area – but both teams canceled each other out.

United boss Mark Skinner said, “I’m disappointed with the result but not the performance.” “We still have a lot of work to do and do. We will continue to develop this team … As a coach, it is the most enjoyable thing to see them taking responsibility, showing their personalities.”

Taylor said: “We want to win the league. We win all our games in the second half of the season and we can win the league. We’ve put ourselves in a position.” [to do that]But there is still a lot of hard work to be done.”