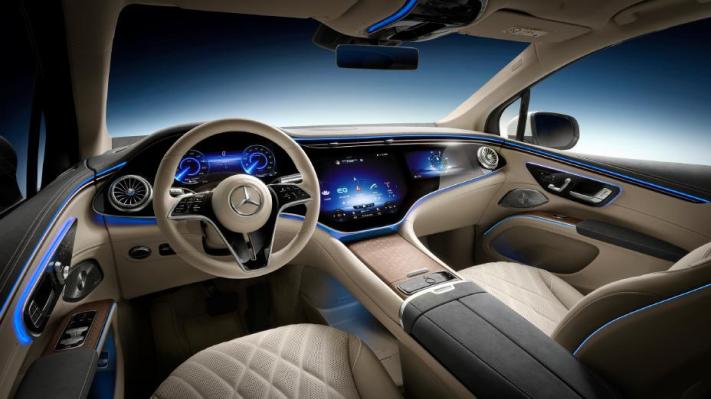 Ahead of its official debut on April 19th, Mercedes-Benz has shared a first look at the interior of the 2023 EQS SUV. As you can see from the photos the automaker provided, Mercedes didn’t reinvent its interior design language. As before, the most eye-catching feature is the optional 56-inch MBUX Hyperscreen that spans across the entire front cabin of the car. It includes a 12.3-inch OLED display that allows the front passenger to watch video content while the car is moving. If an onboard camera detects the driver sneaking a glimpse of the display, the screen will automatically dim to refocus their eyes on the road.

The interior cabin incorporates both wood and leather to create a “lounge-like” ambiance. Mercedes will allow customers to customize the interior in seven different color combinations. It will also offer optional third-row seating and an electrically adjustable second row, allowing the EQS SUV to transport up to seven people. Other notable features include a Dolby Atmos sound system and an air filtration system that incorporates a HEPA filter to prevent pollen and dust from entering the cabin.

Mercedes also announced today it will manufacture batteries for the EQS SUV (and EQE SUV) at a newly opened battery plant in Bibb County, Alabama that will create up to 600 jobs. The company will assemble the vehicle at its long-standing plant in nearby Tuscaloosa, Alabama.