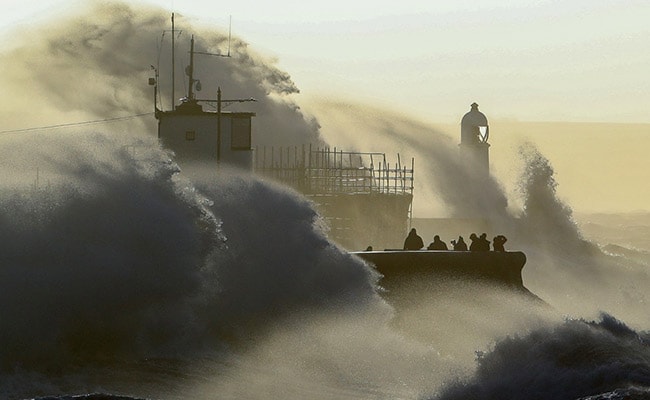 Storm Eunice is responsible for cutting off power to over 140,000 homes in England.

As Storm Eunice battered Britain with record-breaking wind speeds and astonishing waves on Friday, hundreds of thousands of viewers tuned in to a nail-biting live video of planes making bumpy, impressive landings in the UK capital.

In a YouTube livestream that started eight hours ago, Big Jet TV presenter Jerry Dyer follows the trajectory of multiple pilots, from those flying British Airways to Emirates, as they land at London Heathrow Airport amidst a raging storm that has so far been responsible for “provisionally the highest gust ever recorded in England,” as per the meteorological office.

The presenter’s fast-paced commentary keeps viewers transfixed as he analyses everything from pilots’ sudden swoops to their skilful landings, while forceful winds can be heard whipping aggressively in the background.

His entertaining style includes cheeky compliments like “Look at those wings flexing, man,” and “Piece of cake!” as he watches pilots make particularly challenging landings on the airstrip.

“There are a lot of nervous passengers on there right now,” he chuckles as one plane zig-zags through the air.

Another plane is seen hanging sideways as it crashes onto the airstrip, the wheels on the left side of the aircraft sending sparks into the air before the right side touches the ground. “Easy, son!” Dyer comically warns in the background.

Every so often, Dyer is also heard yelling encouragements like “Come on, son!” and “You got it, mate,” as planes stagger against the high winds.

His sports-commentator style also includes moments of genuine appreciation. “We have some very brave pilots, I’ve got to say,” remarks Dyer, as airline captains navigate gusts up to 141 kilometres per hour.

Storm Eunice, cutting off power to over 140,000 homes in England and 80,000 homes and businesses in Ireland, is responsible for millions presently huddled in their homes, forced to take shelter.

As unnervingly tall waves crashed against Britain’s west coast, London was put under its first-ever “red” alert, a warning level that indicates that the weather event poses “danger to life.”

Flights, trains and ferries across Western Europe have also been severely disrupted due to Storm Eunice, while four people have been reported dead so far in the Netherlands, Ireland, and Belgium.