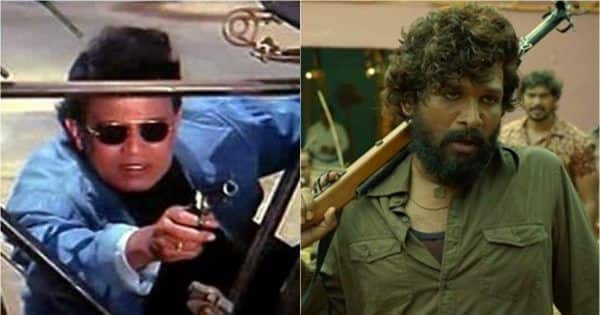 Allu Arjun’s Pushpa: The Rise is enjoying some insane success at the box office worldwide even over 50 days after its release. The movie has been officially declared as a blockbuster and already broken all the records by earning over Rs 100 crore for the Hindi version. It has become one of the highest grossing movies of 2021. What made the movie instantly connect with a huge section of the audience was Allu Arjun’s stardom and his larger than life character Pushpa Raj. Veteran actor Mithun Chakraborty feels that Allu Arjun’s Pushpa is similar to his masala films in the 80s and 90s and that’s why so many people liked it. Also Read – Pushpa: This English cover of Allu Arjun’s Srivalli song by Dutch singer Emma Heesters will leave you stunned – watch video

When Mithun was recently asked about stepping into the OTT world, he said that though a lot of things have changed over the years, a lot of things also stay the same they were a few decades ago. To explain his point Mithun cited the example of Allu Arjun and his film Pushpa. Also Read – Trending South News Today: Pawan Kalyan’s Bheemla Nayak release date, Prabhas and SS Rajamouli mobbed, Ram Charan’s RC15 major update and more

“Look at Allu Arjun’s film Pushpa. It is basically a single screen film. How did it become such a big hit? Because people are relating to it.” When the actor was further asked if he feels Pushpa is similar to the larger-than-life masala films from the 80s and 90s? he responded, “Yes exactly like that. It is all about playing to the gallery. Allu’s. Allu Arjun is a superstar and his superstardom has been used in the film with some fantastic timing. That is why people like it. I watched it. I found it beautiful. Allu has been one of my favourite actors,” Mithun told Hindustan Times in an interview. Also Read – Pushpa star Allu Arjun’s daughter catches on viral Kacha Badam trend and it’s THE BEST reel we have seen so far – watch

After extending its theatrical run and getting amazing response at the box office, the Hindi version of Pushpa has marked its OTT debut on Amazon Prime Video. For the transformation, the superstar had to undergo an intense makeup and prosthetic session. Right from getting his eyebrows and curly hair right to getting the perfect skin colour, the actor aced the look.

Meanwhile, Mithun is currently gearing up for his upcoming series Bestseller. He recently revealed the inspiration behind his character of ACP Lokesh Pramanik on the web show. The character is a huge foodie and a large chunk of that trait comes from the show’s producer Siddharth Malhtora.