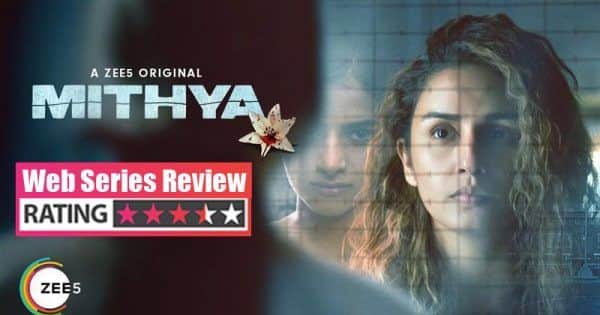 I’ll admit right off the bat to not having watched the original British TV show, Cheat, which Mithya has been officially adapted from. Would watching it have influenced me into liking Mithya more or probably less? Well, I’d never know now. What I do know is that ZEE5’s Mithya, starring Huma Qureshi, Rajit Kapur, Parambrata Chattopadhyy, Samir Soni, Ajeet Biswas and debutante Avantika Dassani, is quite an enjoyable mini-series, packaged with some riveting twists and thrills, and kept extremely snappy at six episodes of just over half an hour each for you to conveniently binge through.

Juhi (Huma Qureshi) accuses her student, Rhea (Avantika Dassani) of plagiarism, setting off a domino effect, where the cheating accusation proves to be just the tip of the iceberg, with several skeletons spilling out of the closet.

Watch the Mithya trailer below:

Just like her last web series, Maharani, Huma Qureshi once again is the heart and soul of Mithya, winning additional brownie points for looking mesmerising in her gorgeous sarees. Rajit Kapur and Parambrata Chattopadhyay provide exceptional support while Samir Soni and Ajeet Biswas are serviceable in their short screen time. Rohan Sippy’s direction is competent for the most part as is the screenplay by Anvita Dutt and Althea Kaushal while Purva Naresh’s dialogues really stand out. The production values are good and the background score, while not adding too much, doesn’t distract either from the proceedings.

A special word for the both editing and cinematography though as the former ensures your attention is hooked from start to finish while the latter lends a gorgeous texture to the narrative. Finally, where Mithya truly scores is in how it keeps dropping a little twist here, and unexpected surprise there, and moves things along at a jiffy, even without ever clutching us in a vice-like grip.

The biggest drawback of the show is Avantika Dassani, and it’s a huge one as she plays the other central character along with Huma Qureshi. The debutante, who also happens to be Bhagyashree’s daughter and Abhimani Dassani’s brother, is a plain, awful actress – there’s no euphemistic way of putting. Her visage is an expressionless pale, portrait and her dialogue delivery is downright monotonic to the point of making a robot seem like a nightingale at an opera. Giving her company in the avenue of bad acting is Bishakha Thapa in a small, but key role.

While Rohan Sippy might be competent for the most part, when he isn’t, his direction really goes begging, with large plot holes and inconsistencies creeping in. Plus, the thrusting of fake feminism, where a man’s simple perspective is always ridiculed and even domestic violence against him is condoned, is something hard to digest. As a feminist myself, it made me cringe.

The aforementioned issues aren’t as prominent as Avantika Dassani’s horrid debut performance, but thankfully, Huma Qureshi is always there to the rescue. Coupled with her performance and a snappy run time, plus some effective twists and turns; Mithya makes for more than a binge-worthy watch. I’m going with 3.5 out of 5 stars.