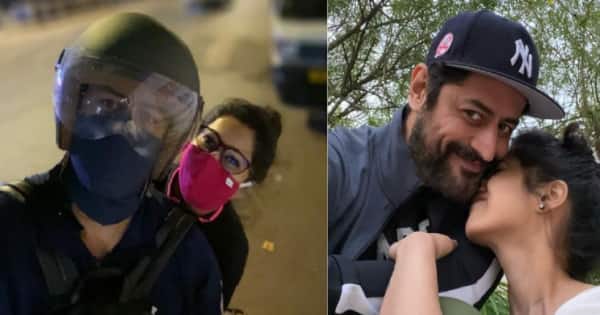 Mohit Raina‘s hush hush wedding announcement on January 1, 2022, was a surprise for his fans. Many were heartbroken that the actor didn’t announce his grand wedding and only shared a few pictures from it and showered all the LOVE on the newly married. He had announced his wedding on Instagram and wrote, ” Love recognises no barriers, it jumps hurdles, leaps fences, penetrates walls to arrive at its destination, full of hope. With that hope and the blessings of our parents, we are no longer two but one. Need all your love and blessing in this new journey,” The actor who is celebrating his first Valentine with wife Aditi and posted some adorable pictures of them together while his wife Aditi’s pictures weren’t clearly seen, fans cannot help but request the Mahadev fame to show his wifey’s clear pictures. The comments read. ” Mahadev, Parvati jii ko clearly dikhaiye”. While fans showered all the love on the couple and called them the power couple. Also Read – Trending OTT News Today: Deepika Padukone’s epic reply on tiny clothes’ taunt, Taarak Mehta Ka Ooltah Chashmah shines on OTT and more

Talking about his intimate wedding with Aditi, in an interview he had said, ” We met a few years back. After a few years of our friendship, which developed with due course of time, we mutually decided to take it ahead. It was during the pandemic (second wave), I met her family to ask for her hand. Then, families met and decided to take it ahead.” The actor even revealed that his wife his from tech background and their wedding took off on a short notice and it was a close knit affair in Rajasthan Also Read – Bhaukaal season 2 Review: Mohit Raina starrer starts slow and you start losing patience before it gets interesting