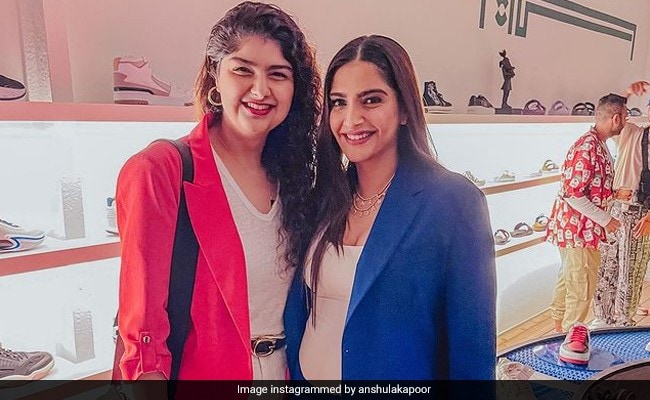 Mom-to-be Sonam Kapoor, along with her family, attended the launch of the Vegnonveg store in Mumbai. Sonam’s cousin Anshula Kapoor was also present and she has now shared a happy photo with the mom-to-be. In the photo, the two can be seen smiling for the camera and Anshula captioned the photo as “Missed you so much @sonamkapoor!! #ImaBeAMasiSoon.” Sonam Kapoor replied to the caption and wrote, “Missed you too! Cannot wait to hang tom.” Anand Ahuja, Shanaya Kapoor, and Maheep Kapoor left an array of red heart emojis in the comment section.

On March 21, Sonam Kapoor and Anand Ahuja announced that they are going to be parents. Sharing surreal photos, Sonam and Anand wrote, “Four hands. To raise you the very best we can. Two hearts. That will beat in unison with yours, every step of the way. One family. Who will shower you with love and support? We can’t wait to welcome you. #everydayphenomenal #comingthisfall2022.” Many celebs including Kareena Kapoor, Malaika Arora, Anushka Sharma had congratulated the couple.

Sonam Kapoor got married to Anand Ahuja in May 2018 and now, they are expecting their first child.

On the work front, Sonam Kapoor was last seen in The Zoya Factor, co-starring Dulquer Salmaan and Sanjay Kapoor.