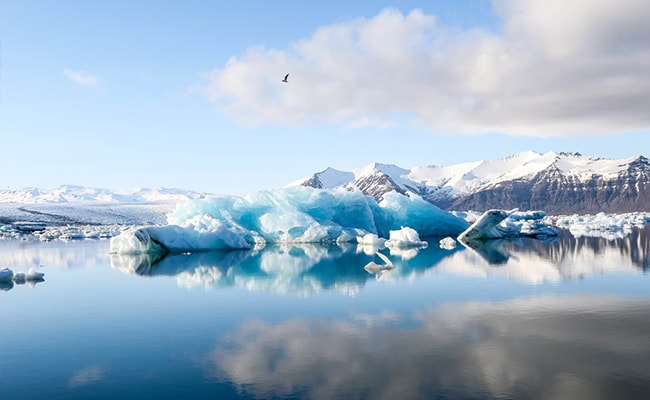 Water from glaciers flowing into rivers is also crucial for hydropower generation. (Representational)

Mountain glaciers shrinking due to climate change are less voluminous than previously understood, putting millions who depend on them for water supply at risk, researchers reported Monday.

Glaciers in the Andes Mountains of South America, for example, were found to store 23 percent less fresh water compared to earlier estimates, they wrote in the journal Nature Geoscience.

Bolivia’s largest city La Paz, with more than two million inhabitants, is highly dependent on glacier runoff for agriculture and as a buffer against drought.

As the slow-moving rivers of ice lose more mass through melt-off than they gain with fresh snow, water flows become irregular — including periods of flooding — and eventually dry up, first in low altitude mountains, and eventually in higher ones.

Water from glaciers flowing into rivers is also crucial for hydropower generation and agriculture.

“The finding of less ice is important and will have implications for millions of people living around the world,” said co-author Mathieu Morlighem, an Earth sciences professor at Dartmouth University.

Some regions, including the Himalayan mountains, were found to have up to a third more ice than thought, “which will reduce the pressure on water resources,” lead author Romain Millan, a post-doctoral researcher at the Institute of Environmental Geosciences in Grenoble, France, told AFP.

Globally, however, the satellite-based survey covering 98 percent of the world’s glaciers — around 250,000 — found that the volume of all glaciers combined, above and below sea level, was 11 percent smaller than earlier calculations.

One silver lining is the implications for sea level rise, projected to be among the most devastating consequences of global warming.

Throughout the 20th century, melting glaciers was one of the main causes of rising ocean levels, along with the expansion of sea water as it warms.

The new estimate lowers the potential contribution of glaciers to sea level rise from about 33 to 26 centimetres (13 to 10 inches).

But that reduction — while not insignificant — is incidental compared to the impact of melting ice sheets, which have become the main cause of rising sea levels in the 21st century.

The kilometres-thick blankets of ice atop West Antarctica and Greenland hold enough frozen water to lift oceans some 13 metres.

Despite their apparent immobility, glaciers are constantly on the move, pushed by gravity.

“We generally think about glaciers as solid ice that may melt in summer, but ice actually flows like thick syrup under its own weight,” said Morlighem.

“Using satellite imagery, we are able to track the motion of these glaciers from space at the global scale.”

The high-resolution images, captured by NASA and European Space Agency satellites, required more than one million hours of computational time on super-computers in Grenoble.

Scientists not involved in the research described it as a “first class study”, and a “great new inventory” of how much ice there is worldwide.

“Because there is less ice stored in the world’s glaciers than we had thought they will disappear earlier than expected, and so the communities that depend on their ice and water will experience the worst effects of climate change sooner,” said Andrew Shepherd, director of the Centre for Polar Observation and Modelling at the University of Leeds.

“In every corner of the planet, the seasonality of river water levels will change dramatically as glaciers melt away.”