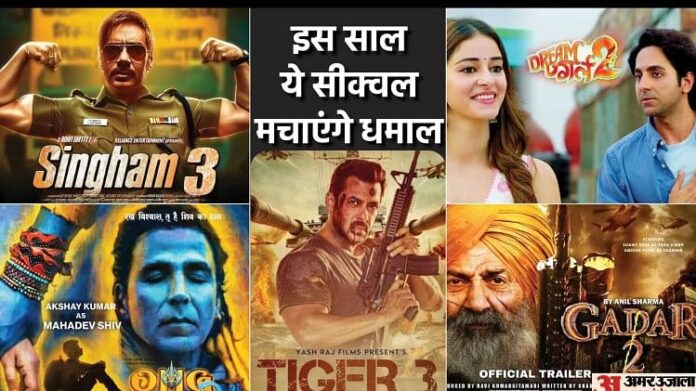 When a film gets immense love from the audience, then the scope of its sequel also increases equally. The audience is also eagerly waiting for the sequels of some of their favorite films. In the year 2023, this wish of the audience regarding many films is going to be fulfilled. Sequels of many blockbuster films are going to come this year. Let’s know…

Actor Sunny Deol and actress Ameesha Patel’s 2001 film ‘Gadar Ek Prem Katha’ was a huge hit. Now after almost 22 years, the sequel of this film ‘Gadar 2’ is about to come. According to the reports, this film may be released in the middle of this year. Once again Sunny Deol’s powerful style will be seen in this. Recently, Sunny Deol’s first look from the film went viral, in which he was seen waving the wheel of a bullock cart in the air.

The next film of Rohit Shetty’s famous super cop Singham series i.e. ‘Singham 3’ will also knock this year. Ajay Devgan will once again be seen in the role of a policeman in the film. Let us tell you that the films ‘Singham’ and ‘Singham 2’ of this series were liked by the audience. Now the fans are eagerly waiting for its third installment.

After the success of the films ‘Ek Tha Tiger’ (2012) and ‘Tiger Zinda Hai’ (2017), the makers are now coming up with its third installment ‘Tiger 3’. It is one of the most talked about films of the year 2023. Apart from Salman and Katrina Kaif, Emraan Hashmi will also be seen in this film. A lot of action scenes will be seen in this film. According to reports, the film will hit the theaters on Eid this year.


‘Oh My God 2’, a sequel to the 2012 film ‘Oh My God’ starring Akshay Kumar and Paresh Rawal, will hit the screens this year. In the second part, along with Akshay Kumar, Pankaj Tripathi and Yami Gautam will also be seen in important roles. Although the release date of this film directed by Amit Rai has not been announced yet. Please tell that Akshay Kumar will be seen in the role of Lord Shiva in this film.