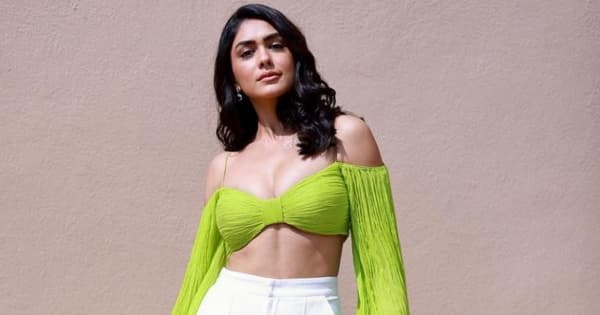 Mrunal Thakur is taking one step at a time as she is steeping towards success. But wan her journey easy. NO! It was damn HARD! In her latest interview, Mrunal spoke about the lowest phase of life and even revealed getting suicidal thoughts at the age of 15 or 16. She said, ” There were a lot of responsibilities as well. At that time, I used to think that if I didn’t do this well, I would be nowhere. I thought I would be married off at 23 and have kids, and that is exactly what I did not want. I wanted to do something different and I would give auditions back then. There were many points where I felt like I was good for nothing.” She even added that at the age of 15 to 20 she too had suicidal thoughts that time you are not very clear on your ambition and often feel low, ” I used to travel by local trains. I used to stand at the door and sometimes, I would feel like jumping off.” Also Read – Mouni Roy calls Suraj Nambiar her ‘everything’ in FIRST PICTURE before their wedding

Mrunal elaborated on whys he had these suicidal thoughts, the actress said that she chose t a subject BMM, and thoughts that’s her cup o tea however after she was unhappy with her choice, ” When you choose a course, it looks very fun on the outside but until you do it, you don’t realise that you didn’t sign up for this, this is something else. That is what was happening with me. I am a creative person. I can’t write scripts. There was a subject called literature… I don’t like reading, I am more of a listener, I like watching things. I used to feel, ‘What did I sign up for?’ There was that self-doubt. I was staying away from my family. At the age of 17-18, living alone in a city like Mumbai is not easy. You have to take care of your rent and food. You have to account for every rupee. And because my father is a banker, if I withdrew even ₹500 from my account, he would get to know” Indeed the girl has come a long way! Life is just beautiful and all the best we can do it LIVE! Also Read – Pippa BIG UPDATE: Ishaan Khatter war biopic expected to release in 2022 by this date; shot on a massive scale [EXCLUSIVE]